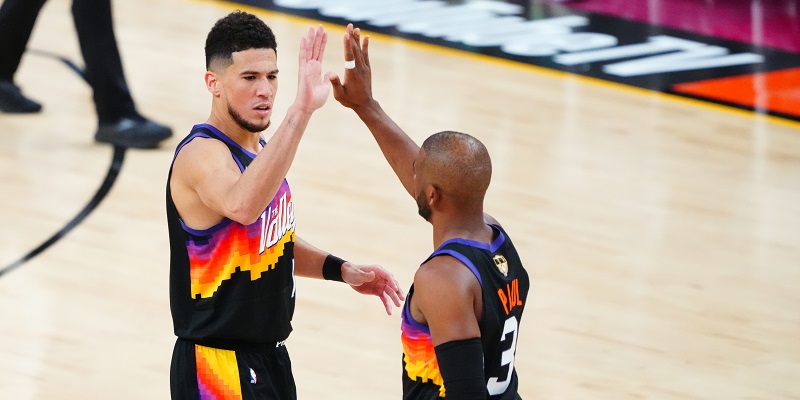 Giannis Antetokounmpo being given the green light to play in Game 2 hasn’t changed the fact the Milwaukee Bucks are heavy underdogs on Thursday night, and in the NBA Finals series overall.

Antetokounmpo’s hyperextended knee responded well to his return Tuesday night, but the Bucks still find themselves in an 0-1 hole and as 5.5-point underdogs at the Phoenix Suns for Game 2.

Seeking their first-ever NBA title in their first trip to the Finals in 28 years, the Suns used a fast pace and near-perfect foul shooting as difference-makers in opening the best-of-seven series with a 118-105 victory on Tuesday night.

Phoenix got 32 points from Chris Paul, 27 from Devin Booker and 22 from Deandre Ayton — and a combined 20-for-20 at the line from the trio — to gain an immediate upper hand for the fourth consecutive time this postseason.

The Suns opened the Finals as the -170 series favorites at PointsBet. They have now moved to -290 favorites at the sportsbook, where Phoenix is backed by 69 percent of the money. Meanwhile, Milwaukee’s odds have lengthened from +145 to +230, but the Bucks are still being backed by 55 percent of the total series bets.

In their prior two Game 1 wins over Denver and the Los Angeles Clippers, the Suns outscored the visitors a combined 29-11 on fastbreak points and missed only three of their 29 free throws. In both rounds, they went on to sweep the first two games at home.

They then outran the Bucks 20-17 and missed only one of their 26 free throws on Tuesday, putting themselves in familiar territory not only in the win-loss column but also in mindset entering Game 2.

“That’s the deal. You want to win every game. That’s everybody’s motivation,” Suns coach Monty Williams said Wednesday. “To win the first game at home was great for us. But we also have the mentality that we’re not satisfied. We have been in this situation before.

“We talked about it this morning. We have already started to prepare ourselves for the best Milwaukee effort that we’re going to see in the series. We’re ready for that. I’m grateful for the experiences we have had leading up to this because I think it’s prepared us for the Game 1 and in particular Game 2.”

Like the Suns, the Bucks walked off the Phoenix court following Game 1 with a been-there, done-that vibe. Milwaukee rallied from 1-0 deficits in each of the past two rounds, including thumping the Atlanta Hawks 125-91 in Game 2 of the Eastern Conference finals en route to winning four of the last five games of the series.

“No, we didn’t want to lose, but we’re here now,” he said. “What are we going to do about it? That’s what this team does. We have guys that react. We learn. We’ll figure it out.

“We’re not playing the guys we were just playing, so we’ve got to adjust some things.”

Antetokounmpo finished with 20 points, which was 12.9 fewer than his average in the eight games immediately prior to sustaining the injury in Game 4 of the Eastern Conference finals.

However, star teammates Khris Middleton and Jrue Holiday, who between them averaged 55 points and made 36.1 percent of their 3-point attempts in Antetokounmpo’s absence the previous two contests, were even further off their games in his return, totaling just 39 points while shooting 5-for-16 from long range.

Holiday said the Bucks were too unselfish with Antetokounmpo on the court, hesitating to take shots they’d been taking — and making — while he was out of action.

“Bud showed those to us,” Holiday said of a Wednesday film session with coach Mike Budenholzer. “Just got to let them fly.”