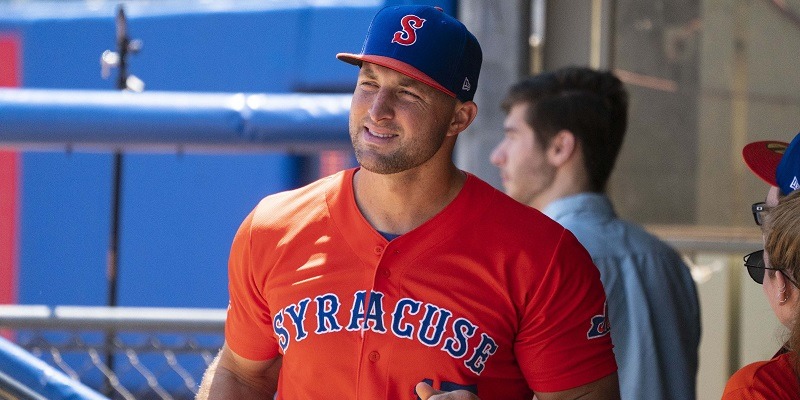 New York Mets minor league outfielder Tim Tebow said Saturday he has turned down several requests from his former college football coach about joining the Alliance of American Football.
Tebow, 31, won the 2007 Heisman Trophy and helped the Florida Gators to two national championships before joining the NFL, but he turned to baseball following the end of his football career.
Orlando Apollos head coach Steve Spurrier, who coached Tebow at Florida, revealed earlier this week that Tebow turned down an invitation to join the Alliance of American Football, choosing instead to keep pursuing his baseball dreams.
Tebow says he rebuffed his former coach more than once, but that his decision wasn’t hard.
“It wasn’t hard at all … and they’ve called a lot,” Tebow said at a Mets press conference on Saturday. “Coach Spurrier keeps calling, and I love Coach Spurrier.”
“It was easy, even though it was an awesome offer and it’s great and humbling … I’m all in on baseball.”
Tebow was a first-round pick of the Denver Broncos in 2010, but he started just 16 games over three NFL seasons with the Broncos (2010-11) and New York Jets (2012).
A left-handed-hitting outfielder and designated hitter, Tebow batted .273 with six home runs and 36 RBIs in 84 games at Double-A Binghamton last season. He was one of 13 Mets farmhands invited to spring training.