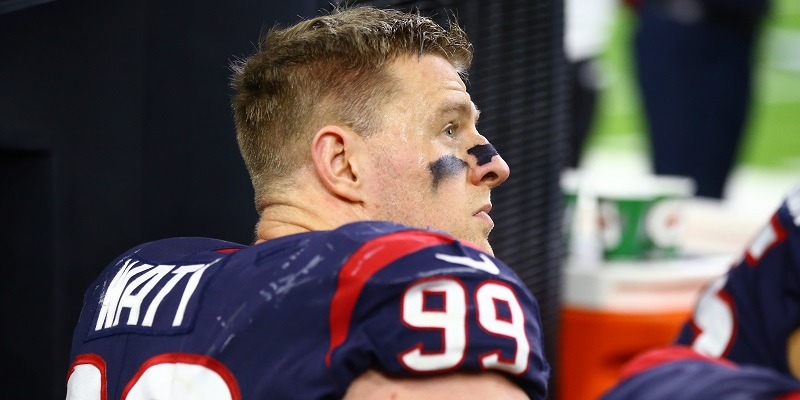 Houston Texans defensive end J.J. Watt confirmed on Twitter on Sunday evening he will miss the rest of the season with an injury sustained Sunday against the Oakland Raiders.

Multiple reports said the team feared Watt tore his left pectoral muscle, and head coach Bill O’Brien told reporters Watt went straight to the hospital after the injury to get an MRI.

Sunday evening, Watt tweeted, “This game can be beautiful and it can also be brutal. Absolutely gutted that I won’t be able to finish the season with my guys and give the fans what they deserve. I truly love this game and can’t stand letting you guys down. Thank you for all of the thoughts & well-wishes.”

Watt was hurt while making a tackle for a 6-yard loss on Raiders running back Josh Jacobs midway through the second quarter. He initially stayed on the field for the next play — moving his left arm in discomfort — but after the Raiders took a pre-snap penalty, he went to the sideline for attention from trainers. Soon after, he jogged to the locker room.

The team initially ruled Watt questionable, but deemed him out after halftime.

Watt recorded three solo tackles and a batted pass before leaving. The 30-year-old entered with four sacks and a league-leading 20 quarterback hits through seven games this season.

Watt had season-ending injuries in 2016 (back) and 2017 (knee), playing in just eight total games between the two. He returned last year to play in all 16 games, notching 16 sacks and 25 QB hits to earn his fifth first-team All-Pro nod.

Johnson had two tackles and a pass breakup before leaving in the first half.

In the fourth quarter, left tackle Laremy Tunsil also departed. The team ruled him questionable to return with a shoulder issue, but he did not come back.

The team acquired Tunsil just before the season from the Miami Dolphins in exchange for two first-round picks and a second-rounder.