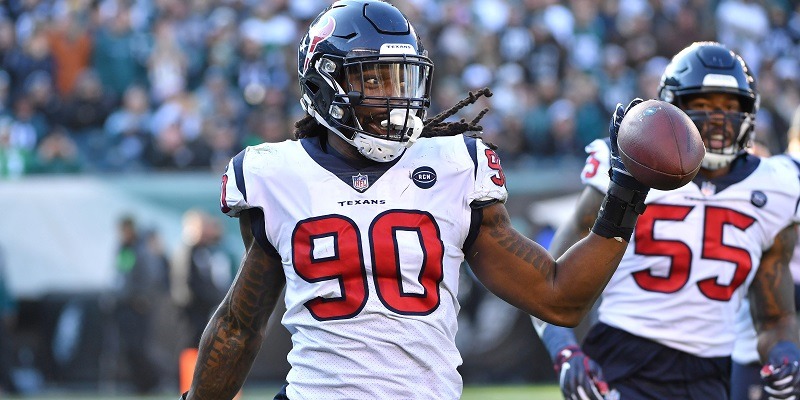 The Houston Texans have placed the non-exclusive franchise tag on outside linebacker/defensive end Jadeveon Clowney, the team announced Monday.
“Today, we have placed the franchise tag on Jadeveon Clowney, but our goal is to continue to work with his representation on a long-term contract,” Texans general manager Brian Gaine said in a statement. “This gives us both an opportunity to continue to do so.”

The non-exclusive tag means Clowney can talk to other teams, which would have to give up two first-round picks as compensation if the Texans didn’t match an offer sheet. The Texans and Clowney can negotiate a longer-term deal until July 15.
Clowney is reportedly being tagged as a linebacker, according to The Sporting News, which sets his salary at $15.443 million, as opposed to the defensive end tag of $17.128 million.
Clowney, the No. 1 pick in the 2014 NFL Draft out of South Carolina, has flashed his edge-rushing skills after being limited by injuries at the start of his pro career. Clowney, 26, made 9.5 sacks in 2017 while starting every game, and he posted nine sacks last season while appearing in 15 games (14 starts).
He has 29 sacks in the past four seasons and has earned Pro Bowl nods in each of the past three years.
With Clowney and J.J. Watt on the same defensive front, the Texans tied for fourth in the NFL in points allowed at 19.8 per game.
Other standout defenders from the 2014 draft class — Chicago linebacker Kahlil Mack and Los Angeles Rams defensive lineman Aaron Donald — each signed huge contract extensions before last season. Donald agreed to a six-year, $135 million extension a day before Mack agreed to a six-year, $141 million extension.
“Timing, it’s all about timing in everything about this league,” Clowney said in the Houston Chronicle last season. “Injuries happen. You get paid at a certain time. You hit the market at the right time. They hold out. They got what they deserve. I think those guys deserve those contracts.”