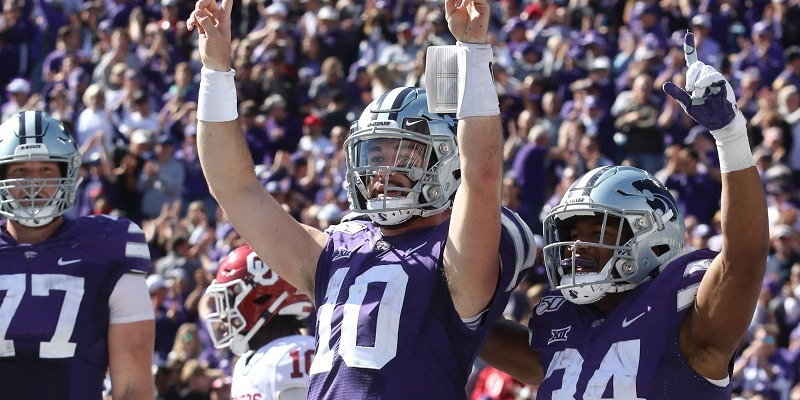 Skylar Thompson rushed for four touchdowns and Kansas State survived a late Oklahoma rally to defeat the No. 5 Sooners 48-41 on Saturday at Bill Snyder Family Stadium in Manhattan, Kan. The victory was Kansas State’s first over Oklahoma in Manhattan since 1996.

It was the Wildcats’ first win over an AP top-five team since defeating No. 4 Texas in 2006 and came in the 100th all-time meeting between the two schools.

The loss ended the Sooners’ 22-game winning streak in true road games, which was the longest in the nation.

Thompson’s four TDs were one short of the Kansas State record for quarterbacks set by current QB coach Collin Klein in a four-overtime game against Texas A&M in 2011.

Oklahoma QB Jalen Hurts was 19-of-26 passing for 395 yards and a touchdown, and he added 96 yards and three touchdowns on the ground.

The Wildcats scored the first 24 points of the second half and opened a 48-23 lead. Thompson’s third touchdown run of the game with 7:31 left in the quarter capped a four-play, 46-yard drive. Oklahoma’s T.J. Pledger fumbled the ensuing kickoff, and Thompson engineered a four-play, 25-yard drive, scoring on a 3-yard run.

Hurts hit CeeDee Lamb on a short pass that Lamb took 70 yards to score to start Oklahoma’s comeback attempt. On the next drive, Hurts ran it in from the 1-yard-line to cut the deficit to 48-38. Gabe Brkic’s 39-yard field goal with 1:49 left made it a one-score game, but the Sooners couldn’t get the onside kick.

Oklahoma jumped out to a 10-0 lead in the first quarter. After settling for a 44-yard Brkic field goal on the first drive, Hurts then scored on a 10-yard run.

The Wildcats responded with an impressive 10-play, 88-yard drive, capped by a 4-yard Thompson run.

On the next drive, facing a third-and-9, Hurts bobbled the snap but picked it up in time to avoid the rush and find Lamb for a 30-yard gain. Hurts scored his second touchdown on a 7-yard scamper for a 17-7 lead.

Kansas State responded with another 10-play drive to pull within 17-14 early in the second quarter.

Oklahoma appeared to be headed to a 20-17 halftime lead, but an A.J. Parker interception in the final minute set up the Wildcats at the Oklahoma 14. Thompson scored on a third-and-10 run with 30 seconds left and the Wildcats led 24-20. Brkic’s third field goal cut Kansas State’s lead to 24-23 at halftime, the first time the Sooners trailed at halftime this season.