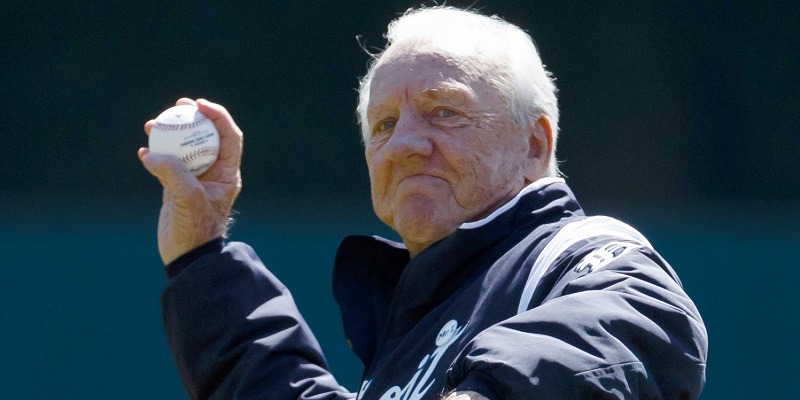 Hall of Famer Al Kaline, who spent all 22 of his seasons with the Detroit Tigers, died on Monday, according to the Detroit Free Press. He was 85.

The cause of death wasn’t immediately known. The Free Press said Kaline died at his home in Bloomfield Hills, a suburb of Detroit.

The player universally known as ‘Mr. Tiger’ was a first-ballot Hall of Fame selection in 1980. The Tigers also retired his No. 6 that year.


The well-respected Kaline served in several roles for the Tigers following his playing career, and was always willing to give tips to up-and-comers or budding stars.

That included Houston Astros pitcher Justin Verlander, the former ace for the Tigers.

“Such a kind and generous man who meant so much to so many,” Verlander said on Twitter. “I hope you knew how much I enjoyed our conversations about baseball, life, or just giving each other a hard time. I am honored to have been able to call you my friend for all these years. R.I.P. Mr Tiger, Al Kaline.”

Such a kind and generous man who meant so much to so many. I hope you knew how much I enjoyed our conversations about baseball, life, or just giving each other a hard time. I am honored to have been able to call you my friend for all these years. R.I.P. Mr Tiger, Al Kaline.

Kaline emerged as a star in 1955, when he had 200 hits — which led the majors — for the lone time in his career and made the All-Star team for the first of 13 straight seasons. He was also known for his strong throwing arm in right field that caused many a runner to pause on the bases.

He hit more than 20 homers on nine occasions and drove in 100-plus runs three times. Kaline finished with his career with a .297 average and 1,582 RBIs.

Kaline was limited to 102 games in 1968 due to a broken left forearm but returned to help the Tigers reach the World Series. He batted .379 with two homers, two doubles and eight RBIs in the series, as Detroit defeated the St. Louis Cardinals in seven games.

Kaline recorded his 3,000th hit on Sept. 14, 1974 off Orioles left-hander Dave McNally in his hometown of Baltimore.

“One of my favorite people, Al Kaline passes away,” Palmer said on Twitter. “Such a graceful, elegant player. Always put the Tigers on my away schedule, just to see, talk with Al. My condolences to Louise , family and friends. #RIP”

I have very rarely asked for a photograph with anyone but several years ago I made an exception for my childhood favorite player. Such a gentle and giving man. The great Al Kaline. pic.twitter.com/sukCdpXj9f


A statue of Kaline stands outside of Comerica Park, and he has remained highly popular more than 40 years after his retirement.

“So sad to hear about the passing of Al Kaline. He was a legend on and off the field,” Whitmer said on Twitter. “Through his 22 seasons with the team, he brought joy to generations of Tigers fans across our state as he worked his way into the 3,000 club. Farewell, Mr. Tiger.”

Major League Baseball commissioner Rob Manfred said in a statement, “Many of us who are fortunate enough to work in Baseball have our short lists of the players who mean the most to us. Al Kaline was one of those players for me and countless others, making this a very sad day for our sport. A lifelong Tiger, Al was a true gentleman and one of the National Pastime’s most universally respected figures. I appreciated his friendship, humility and the example that he always set for others since he debuted as an 18-year-old rookie.

“On behalf of Major League Baseball, I extend my deepest condolences to Al’s wife, Louise, their family and friends, his admirers and the generations of Tiger fans who looked up to him.”