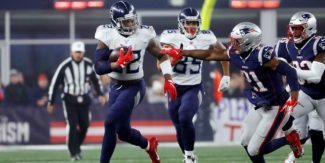 One of the effects of the passage of the NFL’s collective bargaining agreement is the loss of a player tag: teams can use either the franchise tag or the transition tag this offseason, but not both.

One team to feel the effects of that could be the Tennessee Titans, who face decisions with quarterbacks Ryan Tannehill and Marcus Mariota, as well as running back Derrick Henry and offensive tackle Jack Conklin, all of whom are unrestricted free agents.

Without two tags, the Titans will be able to keep only one of them from hitting free agency without coming to contract terms.

The Titans are working to try to sign Henry, which would leave the franchise tag available for use on another player, if needed. NFL Network’s Ian Rapoport tweeted Friday that the Titans “plan to bring back Derrick Henry at a big number.”

Quarterback Tom Brady, set to hit free agency for the first time after 20 seasons with the Patriots, also has been mentioned as a possible replacement for Tannehill on a team that many see as ready to compete for a Super Bowl ring.

The Titans signed Tannehill, a first-round draft pick by the Miami Dolphins in 2012, before the 2019 season to back up Marcus Mariota. But when Mariota struggled, Tannehill stepped in, going 7-3 as a starter and leading the Titans to the playoffs as the sixth seed as his career was reborn.

The Titans advanced to the AFC Championship Game, losing to eventual Super Bowl winning Kansas City Chiefs. Still, at 31, Tannehill was named to his first Pro Bowl as he completed a career high 70.3 percent of his passes for 2,742 yards, throwing for 22 touchdowns and six interceptions.

The Titans drafted him in the second round of the 2016 NFL Draft, and in four seasons, he gained 3,833 yards and scored 38 touchdowns. He also was selected to his first Pro Bowl in 2019.

Conklin, 25, was the Titans’ first-round pick in 2016, No. 8 overall. The Michigan State product was named First Team All-Pro as a rookie and has played in 57 games, all starts, with Tennessee.

Should he hit the free agent market, Conklin will draw considerable interest.