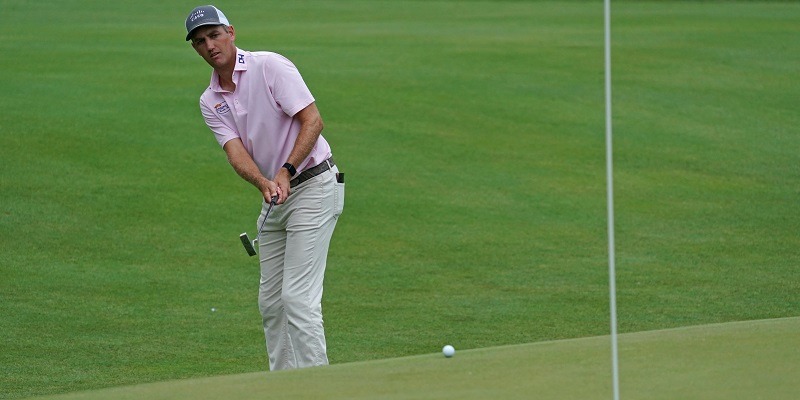 Brendon Todd will take a two-shot lead into the final round of the Travelers Championship after firing a 9-under-par 61 on Saturday in Cromwell, Conn.

Todd’s bogey-free third round at TPC River Highlands moved him to 18-under 192. Dustin Johnson also carded a 61 to book his spot in Sunday’s final grouping at 16 under. The score was a career low for both golfers.

Second-round leader Phil Mickelson shot a 1-over-par 71 and dropped into a five-way tie for seventh place at 12-under.

Todd, 34, missed the cuts at the Charles Schwab Challenge and the RBC Heritage, the PGA Tour’s first two events since returning from a three-month break for the coronavirus pandemic. The three-time PGA Tour winner’s most recent title came at the Mayakoba Golf Classic in Mexico last November.

“It really was a moving day, so I was just trying to get as low as I could, and if anything just use the leaderboard as motivation,” said Todd, who had five birdies on the front nine and four on the back.

Todd said he was looking forward to Sunday’s round with Johnson.

“He’s easy to play with, nice guy, doesn’t show too much emotion out there,” Todd said. “So I think we’re going to have a really good time and probably a really good battle. It seems like he’s starting to play really well and make some putts, and we’re both kind of peaking this week at the same time, so hopefully we can both go low.”

Johnson also played bogey-free golf Saturday, with four birdies on the front and five on the back nine. He finished 17th last week at the RBC Heritage after missing the cut at the Charles Schwab Challenge.

“I’m very happy with the way I played,” said Johnson, 36. “I gave myself a lot of looks. Every hole … I felt like I was giving myself an opportunity to make birdie, and I feel like I’m rolling the putter well, so I just need to get myself in a position where I’ve got a chance to make a putt.”

Kevin Streelman is alone in third place at 15 under after a 7-under 63. Canada’s Mackenzie Hughes (68) is one shot back in fourth, with Bryson DeChambeau and Kevin Na are tied for fifth at 13 under after identical rounds of 65.

World No. 1 Rory McIlroy of Northern Ireland is tied for 18th at 10-under after an up-and-down 69 on Saturday. He had four bogeys and five birdies.

“Every time I took a step forward I took a step back a couple holes later,” McIlroy said. “Sort of stood still compared to everyone else that was going low out there. Disappointing day.”