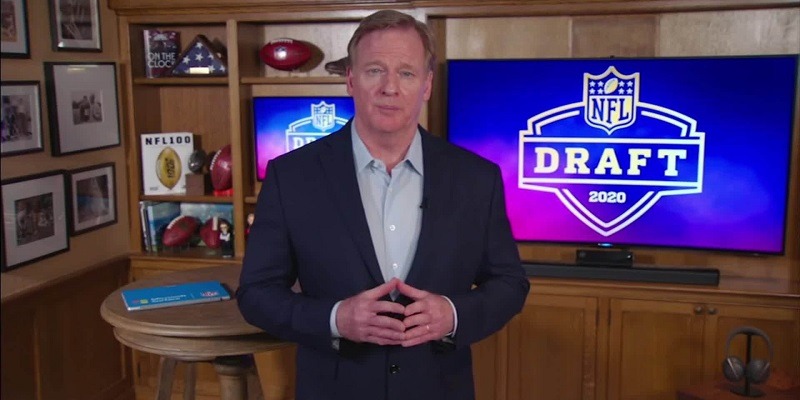 The virtual NFL Draft eliminated bear hugs and live cheering and booing but delivered on the most important milestone by being a glitch-free production.

The dreaded obvious technical issue never occurred as the NFL conducted the 32-pick first round on Thursday via simulcast on ESPN and NFL Network. Ringleader Trey Wingo worked from the ESPN campus in Bristol, Conn., while most of the other talent worked from home.

The proceedings were shy on interviews and strong on storytelling. All the typical analysis was sprinkled in after the picks as well as the usual speculation prior to selections.

The draft was initially scheduled to be held on the Las Vegas Strip, but that plan had to be scrapped due to the coronavirus pandemic.

NFL commissioner Roger Goodell — from his basement — acknowledged just prior to the commencement of the draft that things would be a bit unusual due to the situation.

“This is different for us and it’s different for you because it has to be,” Goodell said to the television audience. “Our thoughts have been elsewhere lately. We have been thinking of those fighting bravely on the front lines and those whose lives have been profoundly changed by his unprecedented crisis.”

Perhaps the worst gaffe came from the commissioner himself when he announced Las Vegas would get another chance to host the draft.

“We think you deserve another shot,” Goodell said. “We’re happy here to announce tonight that the Las Vegas Raiders will host the 2020 NFL Draft.”

Goodell actually meant that the 2022 draft will be held in Las Vegas.

One appearance that surely represented a sign of the times was a taped message from Dr. Anthony Fauci.

Last Super Bowl Sunday, most Americans wouldn’t have known Fauci if he knocked on their doors. Now the 79-year-old director of the National Institute of Allergy and Infectious Diseases is a highly recognizable face as he preaches about social distancing and gives regular updates about the state of the coronavirus breakout.

“It’s a good thing to do,” Fauci said of conducting the draft during the shelter-in-place era. “I know it’s unusual, I know it disturbs the normal pattern, but it really is for your good and the good of the country.”

There wasn’t a trade until after 12 picks — the first time there weren’t any among the top 10 selections since 2015 — as the festivities moved quickly and flowed without headaches.

LSU quarterback Joe Burrow was selected first overall by the Cincinnati Bengals and was interviewed virtually by ESPN’s Suzy Kolber.

And that was it for hours. Player after player was selected without being interviewed, the same per team executives, until finally Kolber spoke with Utah State quarterback Jordan Love after he was selected 26th overall by the Green Bay Packers.

When the Dolphins chose quarterback Tua Tagovailoa fifth overall, the situation begged for an interview regarding the injury issues the Alabama product has dealt with. And also how did Miami go about determining that it wasn’t a risk to take a player coming off a major hip operation?

Goodell did interact off the set with receiver Jerry Jeudy after the Denver Broncos used the 15th selection on the Alabama star. The two conducted a 10-second choreographed dance on TikTok.

That seemed to be a preferable route for Goodell, who earlier referenced not being on stage to greet players who get picked.

“My body won’t miss the bear hugs, but I sure will,” Goodell said on the pre-draft show. “Instead, we’ll find other ways to have fun virtually.”

On multiple occasions, Goodell egged fans on a screen to boo or jeer him as he announced a pick.

Wirfs had promised his mom that he would walk her down the red carpet in Las Vegas. Instead, he arranged for a red carpet to be sprawled in the front yard of the family home in Mount Vernon, Iowa, and he was waiting for her at the other end to hand her flowers.

There were often delays from the time “PICK IS IN” would be splashed on the screen to the moment the pick was announced.

On three occasions, NBA reporter Shams Charania of The Athletic reported picks before they were announced. He credited unnamed sources for giving him the names of the players selected fifth (Tagovailoa), 11th (offensive tackle Mekhi Becton to the New York Jets) and 14th (defensive tackle Javon Kinlaw to the San Francisco 49ers).

But overall, any glitches were minor in nature, just as the NFL hoped.

Now the league will be banking that there won’t be a second straight virtual NFL draft in 2021.