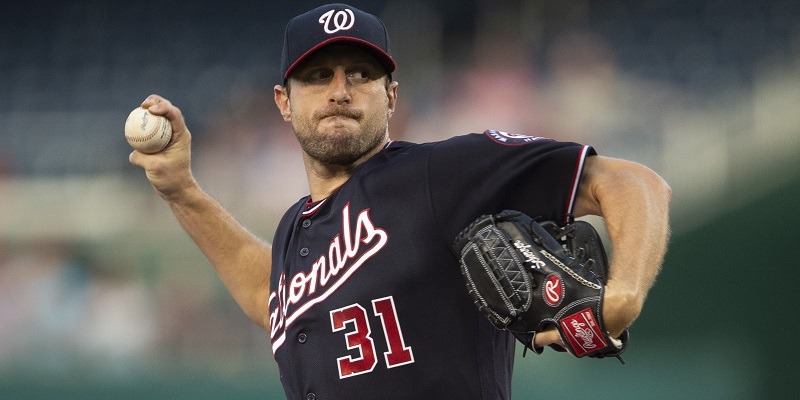 HOUSTON — There was no logical explanation to be shared, so Washington Nationals manager Dave Martinez didn’t allot too much time attempting to decipher something both historic and unfathomable.

With the Nationals’ 7-2 victory over the Houston Astros in Game 6 of the World Series on Tuesday, the visiting teams improved to 6-0, a first in postseason history. Washington will attempt to complete the road sweep Wednesday in Game 7 of the Fall Classic, a result that would give the franchise its first championship.

“Honestly, no. It’s weird, really,” Martinez said when asked to shed some light on the road-success oddity. “I mean, we can’t explain it. I know we were trying to win games at home and just couldn’t do it.”

A key factor in the Nationals’ 7-1 loss in Game 5 at Nationals Park could play to their advantage in the series finale.

Washington ace right-hander Max Scherzer (3-0, 2.16 ERA this postseason), a late scratch Sunday due to spasms in his neck and trapezius, declared himself fit to start Game 7 after throwing in the outfield on Tuesday. Scherzer, the Game 1 winner after allowing two runs in five innings, had a cortisone shot in his neck last weekend, and his condition improved dramatically during the travel day Monday.

With the Nationals clinging to a one-run lead in the latter stages of Game 6, Scherzer went to the bullpen to warm up, seemingly to enter the contest in a high-leverage situation. Nationals third baseman Anthony Rendon spared Martinez of having to make a decision regarding Scherzer, hitting a two-run homer in the seventh inning, pushing the lead to 5-2.

“He said he felt good,” Martinez said of Scherzer. “And he didn’t … warm up to get in the game, he was just throwing to get loose. And after the game, he’s ready to go.”

The Astros will counter in Game 7 with right-hander Zack Greinke (0-2, 5.30 ERA). Greinke has delivered uneven results for Houston this postseason, even in Houston victories. He combined to log just nine innings in Game 4 of the American League Championship Series against the New York Yankees and Game 3 of the World Series, allowing two runs on 10 hits and seven walks with 11 strikeouts.

Greinke has made one start at Minute Maid Park this postseason, and it qualified as his best outing even though he took the loss. He allowed three runs on seven hits with six strikeouts over six innings in Game 1 of the ALCS.

A heralded acquisition at the trade deadline, Greinke has yet to deliver a signature pitching performance for the Astros. Game 7 would serve as a timely reminder of his stellar resume and validate what Houston surrendered (four minor-leaguers) to secure his services from the Arizona Diamondbacks.

“A little excited about it at the moment, but we’ll see,” Greinke said of his pending start before cracking a smile while adding, “I wish it was in a National League park.”

The Astros won a club-record 60 games at home this season and endured a losing skid of more than two games at Minute Maid Park only once (Sept 10-12 against the Oakland Athletics) prior to the World Series.

While the pitching matchup appears to favor the Nationals, the odds of Houston dropping four consecutive games at home for the first time all season would seem slim given past results. But given the odd nature of this World Series, confidently predicting what comes next is folly.

“We don’t know, but we’re going to continue to try to ride this wave as long as possible,” said Rendon, who drove in five runs Tuesday. “Maybe they enjoy our park and maybe we enjoy their park. We’re not going to ask questions, we’re just going to try to go out there and just have some fun.”