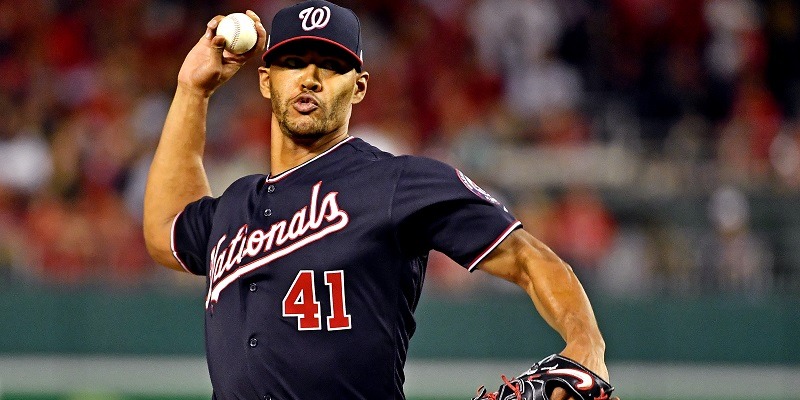 The home-field disadvantage in the 2019 World Series means that after four games, both the Washington Nationals and Houston Astros have won twice, but not in the fashion that was expected.

The Astros’ 8-1 victory in Game 4 on Saturday means that the 2019 World Series is essentially a best-of-three series now. And one team will be on the brink of a title when Game 5 is done.

The series also will return to a battle of aces, as the Nationals are set to send Max Scherzer to the mound Sunday, while the Astros will give Gerrit Cole a chance at redemption. In Game 1 on Tuesday, Cole gave up five runs on eight hits over seven innings as the Nationals earned a 5-4 victory. The Nationals will start right-hander Joe Ross in place of Scherzer, with Game 3 starter Anibal Sanchez available in relief.

“We’re going to let him go as much as he can go,” Nationals manager Dave Martinez said of Ross, who has pitched only two relief innings this postseason.

Cole expects far better of himself Sunday after giving up just one earned run in his previous three starts and 22 2/3 innings in the playoffs. His teammates will back him up with newfound momentum.

“I hope I go home with nothing left in the tank,” Cole said. “So whether (Sunday) is the last time I pitch, or I get the opportunity to pitch another time after that, I just hope I’m just absolutely dog tired by the time I get home.”

In six previous starts against the Nationals before the World Series, Cole was 3-2 with a 2.92 ERA.

Scherzer won Game 1 by giving up two runs on five hits over five innings. He is 3-0 in five appearances in this postseason with a 2.16 ERA and has 34 strikeouts in 25 innings. The Nationals are hoping he could pitch in Game 7, if necessary, with Stephen Strasburg still on schedule to start Game 6.

Ross, 26, was 4-4 with a 5.48 ERA in the regular season, starting nine games among his 27 appearances. He pitched two scoreless innings in Game 3 of the World Series, allowing one hit over the seventh and eighth innings. He was not on the Nationals’ roster for the NL Division Series or Championship Series.

His last start was on the final day of the regular season, as he tossed six innings in a win over Cleveland, allowing one run and four hits while striking out eight and walking two.

Ross had a streak in early August in which he won three consecutive starts, allowing one run and nine hits in 18 innings over that span.

He will try to derail a dangerous Astros’ offense.

“We really have confidence in (ourselves), and we didn’t give up after the two losses at home,” Altuve said on MLB Network after Game 4. “(Saturday) we were getting our pitches to hit, and if not, we were passing the baton to the other guy. We played as a team, and I like where we’re at right now.”