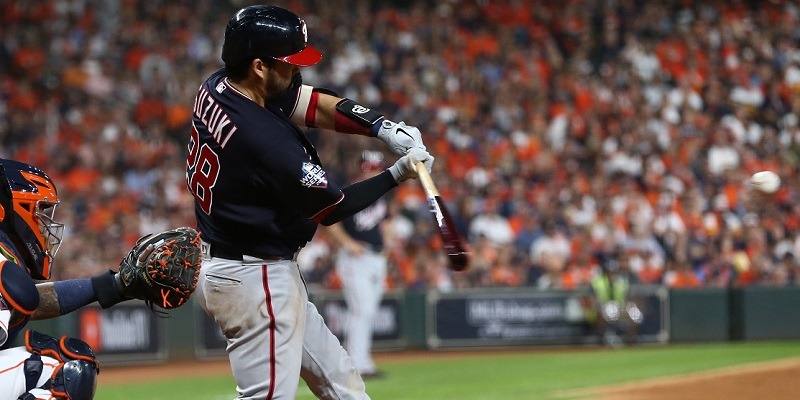 HOUSTON — Kurt Suzuki smacked a tiebreaking home run, and the Washington Nationals took complete advantage of a seventh-inning collapse by the Houston Astros to post a 12-3 victory in Game 2 of the World Series on Wednesday.

The Nationals swept the first two games of the best-of-seven set at Minute Maid Park, and now they head home for Game 3 on Friday, Game 4 on Saturday and (if necessary) Game 5 on Sunday.

Suzuki, 1-for-23 with nine strikeouts this postseason entering Wednesday, clubbed a leadoff homer off Astros starter Justin Verlander (0-1) to ignite a six-run seventh inning. The blast broke a 2-2 tie that had existed since the first inning.

After Astros manager AJ Hinch called for the team’s first intentional walk of the year, putting on Nationals slugger Juan Soto to load the bases with two outs, Bregman mishandled a ground ball off the bat of Howie Kendrick. Robles scored to stretch the Washington lead to 4-2 on a ball that was ruled a single.

Asdrubal Cabrera followed with a two-run single before Bregman added a throwing error when Ryan Zimmerman rolled an infield single up the third base line. Kendrick and Cabrera scored as the stunned and partisan crowd of 43,357 fell silent.

Before the Nationals seized control, it was more of the same offensively for the Astros. Bregman slugged a two-run, game-tying homer with two outs in the bottom of the first, but that proved to be the lone damaging blow off Stephen Strasburg (1-0). The Nationals right-hander needed 114 pitches to complete six innings yet allowed just two runs on seven hits and one walk with seven strikeouts.

After finishing 3-for-12 with runners in scoring position in Game 1, the Astros managed just five such at-bats in Game 2. They came up empty in each and stranded nine baserunners total.

Verlander settled in after a rocky first inning of his own, a frame that included a two-run double by Anthony Rendon. Verlander allowed just one additional baserunner to reach scoring position prior to the seventh, and he had 98 pitches on his ledger entering that fateful frame. When Suzuki recorded his second hit of the night, momentum swung decidedly in favor of Washington, which stretched its postseason winning streak to eight.

Verlander wound up charged with four runs on seven hits and three walks in six-plus innings. He struck out six.