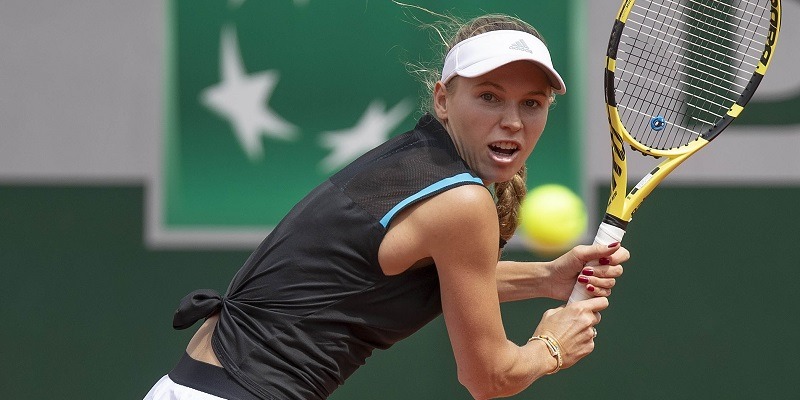 Caroline Wozniacki appeared to be ready to shake a three-match losing streak before unraveling against 68th-ranked Russian Veronika Kudermetova in the first round of the French Open on Monday.
Wozniacki breezed to a 6-0 opener before 3-6, 3-6 defeats sent the former World No. 1 home from Paris. It was the fourth straight defeat for Wozniacki, whose last victory was in the semifinals at Charleston, South Carolina.
Kudermetova, 22, was making her Roland Garros main draw debut and moves to the second round of a Grand Slam for the first time.
“I think I played really well in the first set. I played aggressive. I played the way I wanted to play,” Wozniacki said. “And then I think she got very lucky in the start of the second set and kind of, you know, took advantage of the opportunities she got. And then, yeah, I think I just lost a little steam in the end and I made some unforced errors that I normally don’t do, so that was very frustrating. And, yeah, it is what it is. I haven’t had the best lead-up to this tournament, which also has been frustrating.”
Sixth-seeded Czech Petra Kvitova is also out of the women’s singles field due to a torn muscle in her forearm.
Kvitova, 29, has mounted a well-documented comeback from wounds suffered in a knife attack during a home invasion more than two years ago. She said she began experiencing excruciating pain on Sunday afternoon and went for an MRI exam. The results mean at least two weeks of rest in hopes of being back for Wimbledon. Dr. Radek Kebrle, the surgeon who operated on the left-hander’s hand in December 2016, advised Kvitova to shut it down.
“He said that I shouldn’t really play,” Kvitova said Monday. “It can be much, much worse (if she continued at the French Open) and I could be off for six weeks. … So now it’s shorter period of time to take time to heal it and do whatever I need to do,” she said.
Johanna Konta, the British 26th seed, advanced with a win Monday and will meet American Lauren Davis, also a winner Monday, in the second round.
–Field Level Media (@FieldLevelMedia)