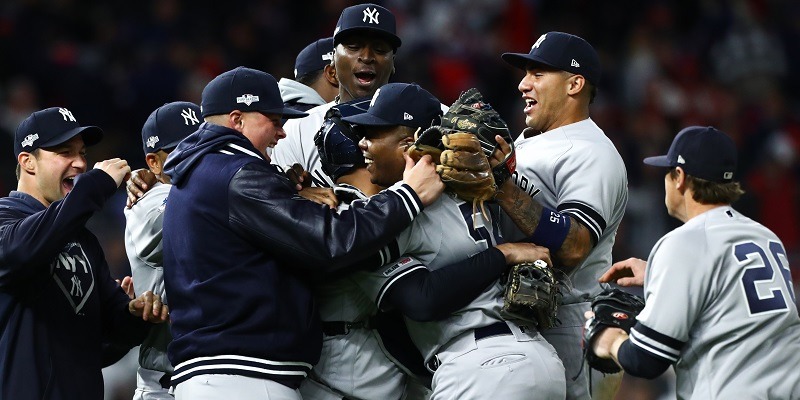 Gleyber Torres homered and doubled twice and Cameron Maybin also hit a home run as the New York Yankees completed a three-game sweep of the Minnesota Twins in the American League Division Series with a 5-1 victory on Monday night in Minneapolis.

Didi Gregorius had two hits and two RBIs and Brett Gardner added an RBI single for New York, which became the first team to sweep a 100-win team in a division series. The Yankees will face the winner of the Houston-Tampa Bay series in the American League Championship Series starting on Saturday.

Chad Green (1-0), one of six pitchers used by New York on Monday, picked up the win with 1 1/3 shutout innings of relief. Aroldis Chapman retired the final five batters to get the save, striking Nelson Cruz out looking with runners on first and second to end the game.

It was the 13th straight playoff win for the Yankees over Minnesota, which also lost its 16th consecutive postseason game to extend its major league record.

Eddie Rosario singled, doubled and homered, and Luis Arraez had a double among his two hits, but Minnesota finished 1-for-12 with runners in scoring position and left 11 men on base. Starter Jake Odorizzi (0-1) suffered the loss, giving up two runs on five hits over five innings, striking out five and not walking a batter.

Torres (22 years, 298 days) gave New York a 1-0 lead in the second inning with a 376-foot home run barely over the glove of Twins left fielder Jake Cave, becoming the youngest Yankee to homer in a postseason game since Derek Jeter (22 years, 105 days) did so in Game 1 of the 1996 ALCS. That Jeter homer is well-remembered because 12-year-old Yankees fan Jeffrey Maier reached over the fence to pull the ball into the stands, with the umpires failing to call fan interference.

On Monday, the Twins loaded the bases with no outs in the bottom of the second when Rosario doubled high off the wall in right, Mitch Garver walked and Arraez lined a single to left. But New York starter Luis Severino then got Miguel Sano to pop out to first on a 3-2 pitch and followed that up with back-to-back strikeouts of Marwin Gonzalez and Cave.

The Yankees then extended their lead to 2-0 in the third when Gio Urshela led off with a double and scored two outs later on Gardner’s single past a diving Sano into left.

New York made it 3-0 in seventh when Torres lined a double off the left field wall and scored one out later on a single by Gregorius.

Rosario cut it to 3-1 in eighth when he lined a 412-foot homer to dead center off Zack Britton. Maybin answered with a home run just inside the left field foul pole in the ninth off Sergio Romo and Gregorius added an RBI single to end the scoring.