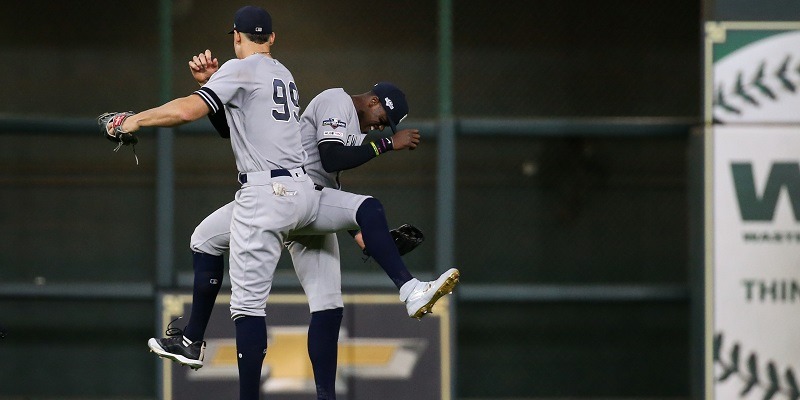 Tanaka (2-0), winless with a 6.62 ERA over seven career regular-season starts against the Astros, earned his second postseason win over Houston, allowing one hit plus one walk with four strikeouts. He needed just 68 pitches to retire 18 batters, relying heavily on his slider.

Tanaka recorded only eight swings and misses, but each came on his slider. The Astros put three of the 27 sliders Tanaka tossed into play with an average exit velocity of 69.6 miles per hour. Tanaka mixed in 21 splitters that yielded four called strikes and 15 four-seam fastballs.

That recipe proved more than effective against an Astros lineup that scuffled in the AL Division Series against the Tampa Bay Rays. Houston will try to rally behind right-hander Justin Verlander in Game 2 on Sunday to avoid an 0-2 series hole before the series shifts to the Bronx.

“I don’t think we’ve really done anything offensively this postseason,” Alex Bregman said afterward. “We need to string together some at-bats. I think everyone is frustrated when we don’t win because we know we are a better offense (than that).”

When Tanaka did allow baserunners, his defense quickly eliminated them. Astros rookie right fielder Kyle Tucker delivered his first career postseason hit with a one-out single in the third and was immediately erased when catcher Robinson Chirinos rolled into a 5-4-3 double play.

After Alex Bregman worked a leadoff walk in the fifth, Yordan Alvarez hit a scorching line drive to right-center field that Aaron Judge ran down in the gap. Bregman wandered too far off the bag at first and was subsequently doubled off, stumbling to beat the pinpoint throw from Judge.

The Yankees led just 1-0 following the Bregman miscue. Torres, whose RBI double off Astros right-hander Zack Greinke (0-2) scored DJ LeMahieu with one out in the fourth, doubled that lead with a one-out solo homer in the sixth.

“Everything is preparation before each at-bat,” Torres said afterward. “I’ve got a really good plan, and I just try to do my job.

“I believe in what I can do. I feel super good when I do my job and help my team in every situation. The most important (thing) for me is to stay humble every time, respect the game and have fun.”

When Torres blooped a two-out, two-strike, two-run single into right-center in the seventh, it stretched the lead to 5-0 and capped a run of four consecutive two-out hits off right-hander Ryan Pressly.