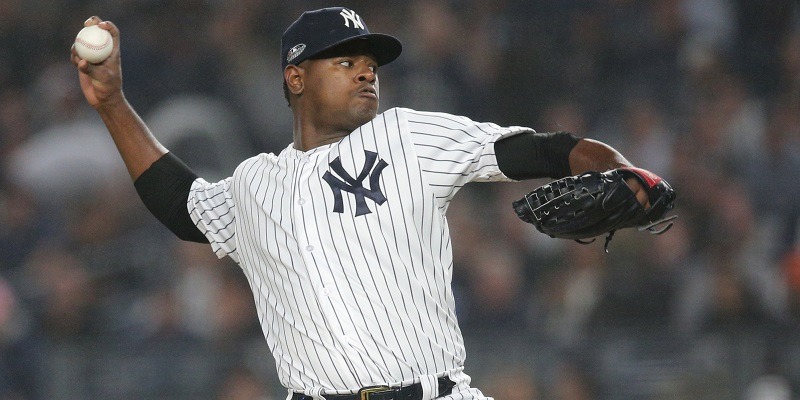 New York Yankees ace right-hander Luis Severino will miss at least the first month of the season with rotator cuff inflammation, general manager Brian Cashman said Friday.
Severino, 25, has yet to throw in a spring training game and was scratched from his scheduled debut on March 5 because of discomfort in his pitching shoulder. An MRI diagnosed the problem.
The Yankees decided he wouldn’t throw for two weeks, but Cashman said the earliest Severino could return would be May 1 because he needs to start from the beginning in his preseason program.
Cashman also updated the status of lefty CC Sabathia, who like Severino, will start the season on the injured list. On Tuesday, he threw 20 pitches of live batting practice for the first time this spring. The 38-year-old, who has announced his retirement after the season, had offseason knee and heart surgeries.
He likely will return to the active roster in April, Cashman said. Once he does, Sabathia must serve a five-game suspension for throwing at two Tampa Bay batters at the end of the 2018 season.
Severino was 19-8 with a 3.39 ERA and 220 strikeouts in 191 1/3 innings last season. In 2017, he went 14-6 with a 2.98 ERA and 230 strikeouts in 193 1/3 innings and finished third in the American League Cy Young Award voting.
Last month, Severino signed a four-year, $40 million extension with a fifth-year club option in 2023.
Sabathia is 246-153 with a 3.70 ERA in 538 starts for the Cleveland Indians, Milwaukee Brewers and Yankees. He was 9-7 over 29 starts for the Yankees last season with a 3.65 ERA.
Manager Aaron Boone already has announced the Masahiro Tanaka will be the Yankees’ Opening Day starter.
–Field Level Media