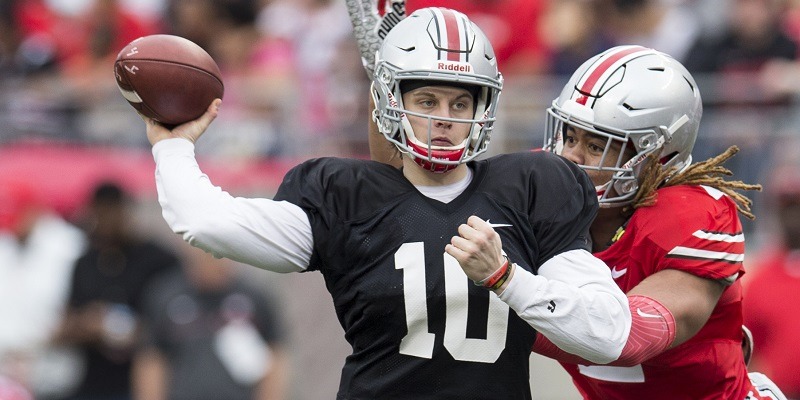 LSU quarterback Joe Burrow was the No. 1 pick in the 2020 NFL Draft and topped a first round that was heavy on quarterbacks and heavier on Southeastern Conference talent.

Burrow went 15-0 and won the national championship with the Tigers. Now he gets a shot at turning around the Cincinnati Bengals, who went 2-14 and haven’t won a playoff game in three decades.

“I worked really hard to get here,” said Burrow, wearing a 740 area code shirt to represent his southeast Ohio roots.

Commissioner Roger Goodell made the official announcement from his basement to kick off the virtual NFL draft with Burrow getting word from his parents’ home in The Plains, Ohio.

Bengals head coach Zac Taylor said the team didn’t consider any trade overtures and the franchise was in agreement on Burrow early in the process. Taylor said Thursday via teleconference that Burrow took complete ownership of the offense at LSU and he’s the total package.

“There’s a lot of things tangibly and intangibly that he brings to the table,” Taylor said. “You see it with your own eyes — ability, leadership, he’s the total package.”

The Ohio State transfer and Heisman Trophy winner had an FBS-record 60 TD passes last season. He became the third player in three years to claim that trophy and emerge as the No. 1 pick in the ensuing draft, following Oklahoma quarterbacks Baker Mayfield and Kyler Murray.

The fourth pick and first without a connection to the Buckeyes was Georgia offensive tackle Andrew Thomas to the New York Giants at No. 4, before the Miami Dolphins used the first of their three first-round picks to select Tagovailoa.

Tagovailoa’s durability — hip surgery, multiple ankle surgeries, a knee injury and broken finger — was a headline in recent months, but medical professionals signed off on the quarterback’s physical.

Tagovailoa is an explosive runner with good feet, and the southpaw was accurate on throws down the field at Alabama. He was 22-2 as a starter for the Crimson Tide with 87 touchdowns and 11 interceptions.

“I’m able to play if need be,” Tagovailoa said of his rookie season. “But I think the biggest thing for me right now is being able to take it in, soak it in, enjoy it with my family and get to work.”

At No. 18, the Dolphins got Tagovailoa some protection, nabbing Southern California offensive tackle Austin Jackson.

Herbert, who spent four years at Oregon, went to the Los Angeles Chargers at No. 6 as the replacement for Philip Rivers. The Chargers later moved back into the first round in a deal with the New England Patriots to select Oklahoma linebacker Kenneth Murray 23rd.

The Carolina Panthers chose Auburn 325-pound defensive tackle Derrick Brown seventh, and at No. 8, the Arizona Cardinals nabbed Clemson linebacker Isaiah Simmons, who can play numerous positions but doesn’t have one ideal fit in an NFL defense.

Simmons, who weighs 238 pounds, played more snaps at slot cornerback than outside linebacker in 2019 and ran a 4.38 40-yard dash at the NFL Scouting Combine.

The Cleveland Browns opted for Alabama offensive tackle Jedrick Wills, completing the top 10 without a trade for the first time since 2015. Louisville offensive tackle Mekhi Becton, a massive 364-pounder who moves with ease, was selected 11th by the New York Jets.

Alabama’s third player in the top 12 was wide receiver Henry Ruggs, the first draft pick in the history of the Las Vegas Raiders. True to franchise form, Ruggs was the fastest player at the combine, running a 4.27 40-yard dash. Las Vegas drafted Ohio State cornerback Damon Arnette 19th, using a selection from the Chicago Bears in the Khalil Mack deal.

Iowa offensive tackle Tristan Wirfs was the 13th pick after the first trade of the draft put Tampa Bay on the clock. The Buccaneers traded up one spot with the NFC champion San Francisco 49ers, sending a fourth-round pick and getting a seventh-rounder back. The Niners drafted South Carolina defensive tackle Javon Kinlaw with the 14th choice. San Francisco used another trade to climb from the 31st pick to No. 25, selecting Arizona State wide receiver Brandon Aiyuk.

The Philadelphia Eagles selected TCU wide receiver Jalen Reagor, whose skill set compares to 49ers wide receiver Deebo Samuel, 21st, and Minnesota kept the wide receiver theme alive with LSU’s Justin Jefferson at No. 22. The Vikings received that pick from Buffalo in the trade that sent Stefon Diggs to the Bills.

The Packers traded up for the 26th overall pick to select Love, a developmental prospect from Utah State, in a deal with the Dolphins. With the pick acquired from Green Bay, Miami selected Auburn cornerback Noah Igbinoghene, the record-setting 14th SEC prospect drafted in the first round.

LSU running back Clyde Edwards-Helaire was the final pick of the first round, adding another weapon to the Super Bowl champion Kansas City Chiefs. He was the fifth member of the Tigers’ title team selected.