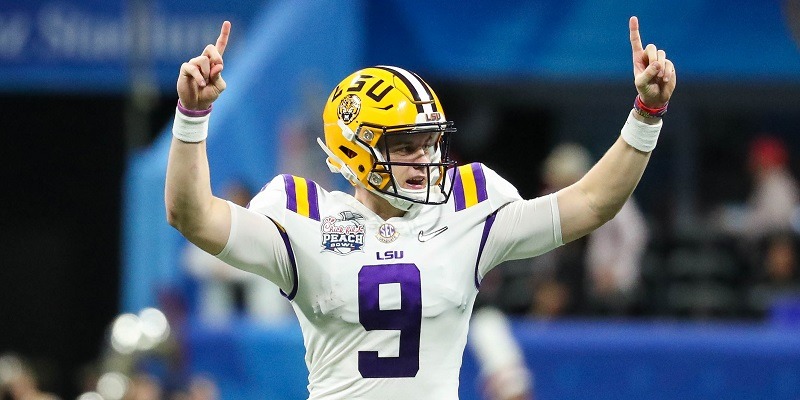 For the fourth consecutive draft, we have a quarterback class with at least four prospects deserving of first-round consideration.

DeShone Kizer (2017) and Drew Lock (2019) each slipped to Round 2, but 2020 should bring at least three first-round quarterbacks for the fifth straight year.

This class is excellent at the top, with perhaps the most complete prospect (Joe Burrow) since Andrew Luck and another prospect (Tua Tagovailoa) who would be the top overall pick in most years if he were healthy.

Let’s begin with those two before diving into two major talents in Justin Herbert and Jordan Love.

What we like: Burrow is one of the rare quarterback prospects who is good or better at almost everything. Of course, he’s also exceptional in some areas, most notably accuracy and movement (both in and out of the pocket).

Burrow is one of the most accurate prospects in years, and he even excels on deep throws. He routinely places throws either upfield on the outside shoulder (if his receiver wins over the top) or on the back shoulder (if the defender stays over top).

Burrow’s pocket management and escapability are even more impressive. He has outstanding peripheral vision and feel for the rush, and he excels at both subtle step-ups or slides, and sudden jukes or spins to evade rushers. And while known for carving up defenses with his mind (he often does), Burrow is absolutely lethal in off-schedule, playground situations.

Joe Burrow amazes in many ways, but No. 1 is movement, both in-pocket nuance and escapability (Romo-like)

Cause for concern: Most detractors would point to Burrow’s arm, which isn’t a cannon. But he showed major improvement in 2019 (especially rotating his hips for extra power), and arm strength is overrated.

That said, Burrow will have to play a bit differently with a weaker supporting cast. His receivers won’t win every 50-50 ball, and his line will have more leaks. He can be a bit reckless as a runner, and while he’s very tough, he could protect himself better.

Pro comparison: Tony Romo, Dallas Cowboys — No comparison is perfect for Burrow, because he’s so complete, but his slipperiness in the pocket is very reminiscent of Romo. Likewise, his mechanics and calm style of play compare reasonably to Tom Brady.

System fits: Burrow thrived at LSU in a spread passing game that used all five eligible receivers, but Bengals head coach Zac Taylor, from the Sean McVay tree, runs a play-action-heavy offense that often keeps extra blockers in. Taylor runs spread concepts as well, but his scheme naturally puts less on the quarterback’s plate. He might have to give Burrow more freedom before long.

In five years, Burrow will be … either a top-15 quarterback, or a top-three quarterback. No QB is immune to a terrible situation, and it’s not impossible things go sour in Cincinnati. But it’s very hard to see Burrow busting because he has so few weak spots. It’s also easy to see his accuracy, mobility, toughness and mental acuity making him a superstar.

What we like: Tagovailoa is remarkably quick in all areas. He has tap-dancing feet, swivel-chair hips and a lightning release, but also a rapid mind. Not only does he read the field well, but he does so quickly, processing what he sees and making decisions much faster than most college quarterbacks.

What is Tua Tagovailoa’s best trait? Quickness… in all areas

Especially dangerous because eyes/mind/feet almost always work together. Nobody else sees it, sets up and triggers faster than Tua#NFLDraft pic.twitter.com/m8xABufkdh

In turn, Tagovailoa throws with rare anticipation. He quickly knows where to go with the ball and releases it in a hurry. While not quite as accurate as Burrow (especially down the field), Tagovailoa is lethal in short and intermediate areas, further weaponizing his anticipation.

He’s also a terrific pocket mover, with an excellent feel for rushers and ability to slide or step up while keeping his eyes downfield.

Cause for concern: More so than Burrow, Tagovailoa’s lack of arm strength limits him at times. He can’t make certain off-platform throws, and his deep ball accuracy is inconsistent, likely because they require so much effort. Perhaps improved mechanics could help.

Tagovailoa’s health is obviously concerning, too. Nobody knows if his issues will recur, but his style of play is foreboding. While perhaps the victim of bad luck, Tagovailoa invites contact by playing “hero ball” at times. He holds the ball late while scrambling and takes a remarkable number of hits while or after delivering throws. His game isn’t built on scrambling, but he must protect himself better when he does.

For having so few INTs, Tua Tagovailoa makes a surprising number of poor decisions. To his credit, he improved in 2019.

But that “hero ball” mentality still pops up a tad too often. That mentality also leads to a ton of unneeded hits. He must protect himself better#NFLDraft pic.twitter.com/2aWtb1b0iD

Pro comparison: Drew Brees, New Orleans Saints — Tagovailoa’s build and movement remind of Russell Wilson, but he’s less physically gifted. His style is much more like Brees, with his success stemming from both physical and mental efficiency.

System fits: Alabama used a wide variety of concepts, and Tagovailoa executed most well, so he could probably adapt to any scheme. His quick-twitch processing and delivery would be best weaponized in a spread attack like Chan Gailey’s in Miami, but he could also handle heavy play-action with Anthony Lynn and the Chargers.

In five years, Tagovailoa will be … a top-12 quarterback, or an injury-prone starter who has shown flashes. Even if Tagovailoa’s hip is never again an issue, it’s hard to imagine him becoming an iron man given his style of play. That said, he could still be successful despite injuries (see Carson Wentz and Deshaun Watson).

What we like: Tools and experience. Herbert has a prototypical build, a very strong arm and excellent mobility, giving coaches plenty to work with. He can hit the deep digs and outs with zip, touch and precision, and he makes some jaw-dropping throws amid pressure. He could even handle a regular run-game role, as he did in Oregon’s Rose Bowl win (three rush TDs).

I get why Justin Herbert is enticing. He makes some absolutely phenomenal throws from muddy pockets or while taking huge hits.

This first one is from his freshman year, with Justin Reid cleaning his clock. Couldn’t hand it to the TE any better than that#NFLDraft pic.twitter.com/umHToGCqsU

Herbert played in 43 games at Oregon and showed improvement over time. He cut down on bad sacks — an issue earlier in his career — in 2019 and has steadily become more accurate, rarely spraying the ball.

Cause for concern: For a four-year starter, Herbert lacks the instincts and processing speed you would expect. While very smart, he’s often a beat slow to trigger, even when routes come open as designed within his field of vision. He works deep into progressions at times but can still be slow reading 2- or 3-man route combinations.

Justin Herbert is extremely smart and experienced. But it doesn’t show in his processing, which often borders on too slow.

Too often, plays with simple reads worked as designed, but he failed to pull the trigger, despite having time. The lack of progress is a concern.#NFLDraft pic.twitter.com/tjKSrEw4hN

Herbert isn’t a great multi-tasker, as his execution deteriorates when issues (low snap, pressure, first read taken away, etc.) crop up. This particularly stands out when he scrambles. While he has incredible tools for off-schedule playmaking, he lacks the instincts to exploit them, often squandering opportunities.

Pro comparison: Josh Allen, Buffalo Bills — Allen was another toolsy prospect with a big arm, great mobility and concerns about field-reading and processing speed. Allen has a stronger arm and is more creative off-schedule, but Herbert is more accurate and a better decision-maker.

System fits: For now, Herbert isn’t ready to carry an offense, or even a passing game. Not a snappy decision-maker, he might struggle in Miami’s shotgun, spread-empty system under Chan Gailey. He would be better off insulated by a good run game and play-action, with the Bengals, Chargers or Raiders making sense.

In five years, Herbert will be … leaving his team wanting more. Herbert will make some terrific plays — he’s too gifted not to — but it’s hard to see him as the driving force of an offense. His success could depend largely on his supporting cast.

What we like: Love has the most natural gifts of any prospect in the class. His arm isn’t just strong — it’s also loose and springy, capable of making throws from all kinds of platforms in a way Herbert cannot. Love has more than a fastball, too, showing a great feel for touch on intermediate and deep throws.

That arm makes Love even more dangerous on the move. He’s outstanding on bootlegs and sprint-outs, and he has above-average escapability. He consistently looks to throw when scrambling, and he’s capable of throws that few NFL QBs would even try.

Hoping Jordan Love can become Patrick Mahomes is unrealistic. But these are the throws that invite that comparison.

Who else can make that 1st throw vs. Michigan St? Mahomes, Rodgers… ¯\_(ツ)_/¯#NFLDraft pic.twitter.com/CgbZE0eDwm

Cause for concern: After showing flashes earlier in his career, Love’s mental processing and decision-making collapsed in 2019, and not just because of a depleted supporting cast. His head pinballed between reads with no apparent plan, and he committed cardinal sins (throwing late to the flat) far too often, leading to 17 interceptions and several others that were dropped.

It wasn’t just in 2019, and not just a bad supporting cast. He also had a bunch of dropped INTs.

Who’s the last QB with this much bad tape to fix those issues in the NFL?#NFLDraft pic.twitter.com/LaymbzOlVp

Love’s mechanics and accuracy are mediocre at best, which is worrisome. While he doesn’t usually spray the ball, he often throws with poor ball placement, limiting receivers’ chances to create after the catch. Add in shaky pocket movement and ability to handle pressure, and Love has a lot to work on.

Pro comparison: Patrick Mahomes, Kansas City Chiefs — This comparison is too lofty, but it’s more about how Mahomes was in college with regard to arm talent and style of play. Mahomes was a mechanical mess with reckless decision-making and accuracy at Texas Tech, and Love is even more extreme in that regard.

System fits: The 2019 version of Love is simply not ready to play, no matter the system. He needs sit for at least a year with a coach who excels at sharpening mechanics. He also probably needs a schemer who can manufacture offense through 2- and 3-man reads. The Saints would be a perfect fit, with the Raiders, Packers or Colts also making sense.

In five years, Love will be … entering a make-or-break year as a starter, or on his second team as a reclamation project. “Project” QBs almost never work out, with Mahomes the glaring exception. Perhaps Sean Payton and the Saints could bring out Love’s best, but it’s very hard to overcome issues with accuracy, processing and decision-making.