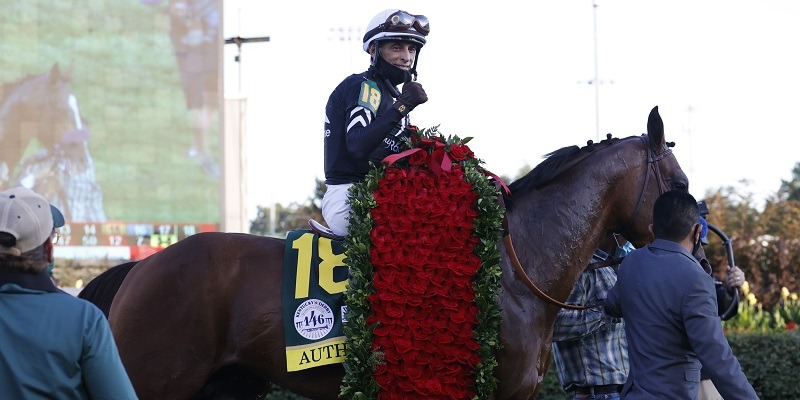 Despite the absence of a greatly anticipated rematch, Saturday’s Preakness Stakes at Pimlico Race Course includes a bit of drama.

The 1 3/16-mile race, normally the second jewel in horse racing’s Triple Crown, will be run as the last of the three races this year after the COVID-19 pandemic forced a reshuffling of the order.

Authentic, winner of the Kentucky Derby on Sept. 5, has been made the 9-5 morning-line favorite under John Velazquez out of Post 9. The Into Mischief son has won five of six career starts for trainer Bob Baffert, who’ll be seeking a record eighth Preakness Stakes victory.

“I feel real good about it,” said Baffert, whose seven Preakness wins tie R. Wyndham Walden, a trainer in the late 1800s. “I think he’s going to run his race. He hasn’t regressed. He looks great.”

Tiz the Law not in the field

Belmont Stakes winner Tiz the Law, who finished second in the 1 1/4-mile Kentucky Derby after a thrilling stretch battle with Authentic, will not run in the Preakness. His connections have decided to aim for the Breeders’ Cup Classic on Nov. 7.

The Preakness’ 11-horse field includes several contenders who did not run in either the Belmont Stakes or Kentucky Derby.

Swiss Skydiver will try to become the sixth filly overall and first since Rachel Alexandra in 2009 to win the Preakness Stakes. Robby Albarado will ride Swiss Skydiver, who’ll break from Post 4 at 6-1.

“If they had written a 3-year-old filly race at a mile and an eighth or a mile and a quarter, a Grade 1, it would have been a no-brainer. We’d probably be in that,” said trainer Ken McPeek, whose filly finished second in the Grade 1 Kentucky Oaks on Derby Day.

Art Collector, the 5-2 second choice with jockey Brian Hernandez Jr., was scratched from the Kentucky Derby due to a minor foot injury. The colt has won four straight races, including the Grade 2 Blue Grass Stakes by 3 1/2 lengths ahead of second-place Swiss Skydiver at Keeneland on July 11.

Baffert-trained Thousand Words will start from Post 5 at 6-1 under Florent Geroux. The colt was scratched minutes before the Kentucky Derby after rearing and falling in the paddock.

The race will be run without the general public in attendance.

Tiz the Law won the Belmont Stakes, usually the last of the Triple Crown races, on June 20. The traditional 1 ½-mile distance was reduced to 1 1/8 miles this year.