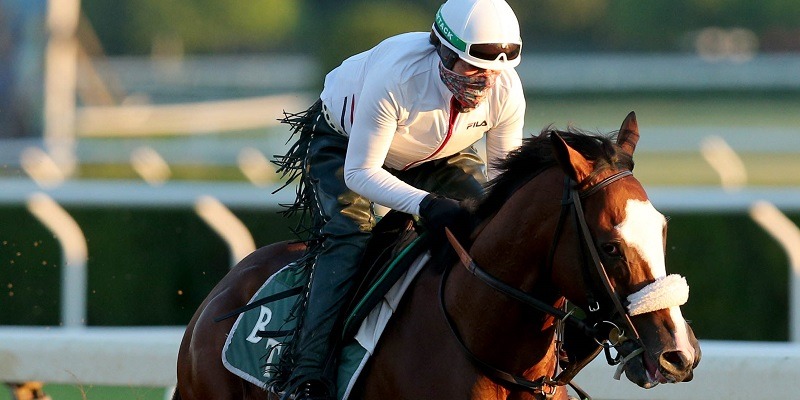 A four-month delay due to the COVID-19 pandemic hasn’t affected the Kentucky Derby’s stature, though significant changes will be obvious at Saturday’s Run for the Roses.

The 1 1/4-mile race for 3-year-olds will be held at Churchill Downs with no spectators, meaning the traditional spectacle of fancy hats and fans imbibing mint juleps will be absent.

A new 20-horse starting gate, replacing a primary and auxiliary gate combination, will be used for 18 colts. Posts 1 and 20 will be empty, something unlikely had the race been run on the first Saturday in May as per usual.

Tiz the Law, winner of the Belmont Stakes in June, was tabbed the 3-5 morning-line favorite for Saturday’s race. The last time the early choice was 3-5 was in 1989 with the entry of Easy Goer and Awe Inspiring.

A son of Constitution, Tiz the Law has won six of seven career starts, which include a third-place finish in the Kentucky Jockey Club Stakes (Grade 2) at Churchill Downs in November.

“(He’s) the same horse, more experienced of course,” trainer Barclay Tagg told the media this week. “I didn’t think it was a lack of experience that got him then. It was an off track and he came out of the gate slow. He’s been pretty nice since.”

Tagg, 82, attempts to become the oldest trainer to win the Kentucky Derby. Art Sherman was 77 when he trained California Chrome to victory in 2014.

Tagg and Tiz the Law owner Sackatoga Stable will be seeking their second Kentucky Derby victory, having teamed up with Funny Cide in 2003. Funny Cide went on to capture the Preakness but finished third in the Belmont.

Tiz the Law, ridden by Manny Franco, is coming off an impressive performance in winning the Travers Stakes (Grade 1) at Saratoga Race Course on Aug. 8.

“Some people we concerned, ‘Well, there’s only four weeks between the Travers and Kentucky Derby this year,’” Sackatoga Stable’s Jack Knowlton said. “If you look at the two works Tiz had up in Saratoga, I think that question was answered. He was just as sharp as he’s ever been.”

Kentucky Derby favorites on the outside

All off the top choices will start from the outside. Tiz the Law will break from the No. 17 post, which never has produced a Derby winner. Honor A.P., the second choice at 5-1 under Mike Smith, drew the No. 16 post. Authentic, at 8-1 and ridden by John Velazquez, is the third choice starting from the far outside.

“I always think back to Giacomo who won at 50-1, so the odds don’t mean anything,” Shirreffs said. “You just have to see how the race is run.”

Bob Baffert, whose five Kentucky Derby winners include Triple Crown champions American Pharoah and Justify, will send two runners out Saturday. In addition to Authentic, Baffert trains 15-1 shot Thousand Words, who drew the No. 10 post and will be ridden by Florent Geroux.

“What makes the Derby a great event is when 150,000 people show up. It’s not the same when there’s not people watching and cheering you on,” Baffert said. “That’s what makes the Derby so great, all the fans. I think it’ll probably be better on television (this year) than being here.”

The 146th running of the Kentucky Derby’s postponement resulted in a re-ordering of this year’s Triple Crown races.

The Belmont Stakes, usually the third jewel run at 1 ½ miles, went off June 20 at 1 1/8 miles. The 1 3/16-mile Preakness Stakes, which normally follows the Derby, will be run Oct. 3 at Pimlico Race Course.