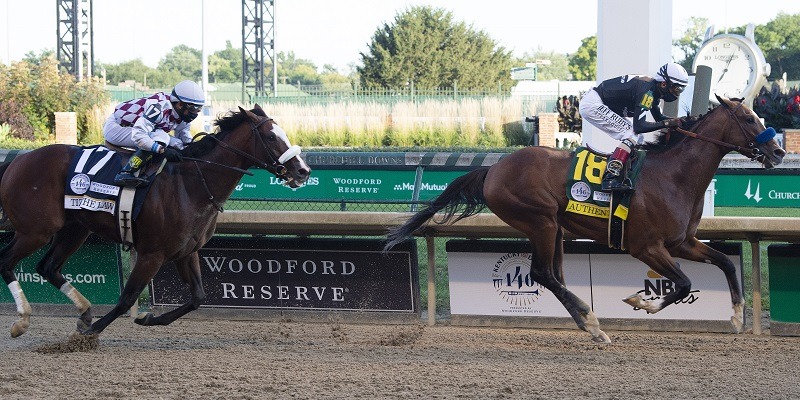 There will be no Triple Crown winner in 2020.

Tiz the Law, the 3-5 favorite, was attempting to claim his second Triple Crown race of the year. He won the Belmont Stakes, usually the last of the three races, on June 20 after the COVID-19 pandemic forced a rescheduling of the races.

Authentic broke slowly from the far outside but went to the lead by the clubhouse turn. Tiz the Law, breaking from the No. 17 post, stalked the pace before making his move to join the leader in the far turn.

The two colts battled through the stretch, with Authentic crossing the wire in 2:00.61 over the traditional 1 1/4-mile distance 1 1/4 lengths ahead of Tiz the Law. It was the seventh-fastest Derby time.

Fifteen 3-year-olds competed before no spectators due to the pandemic.

Jockey John Velazquez, 48, took his third Kentucky Derby victory on the 8-1 third betting choice, owned by Spendthrift Farm, MyRaceHorse Stable, Madaket Stables and Starlight Racing. It also was Velazquez’s first ride on Authentic because previous rider Mike Smith was atop Honor A. P. in the Derby.

“That was won by Johnny. Just the way he handled the horse, a speed horse like that, he earned that one right there,” Baffert said. “He beat a really good horse. Tiz the (Law) is a first-class horse.”

Rare loss for Tiz the Law

Tiz the Law trainer Barclay Tagg, 82, was trying to become the oldest trainer to win the Kentucky Derby. Tagg and owner Sackatoga Stable sought their second Derby victory, having teamed up with Funny Cide in 2003. Funny Cide went on to capture the Preakness but finished third in the Belmont.

“We’re obviously disappointed, but Tiz and @jocjkeyfranco ran a great race,” Sackatoga Stable’s Jack Knowlton said via Twitter. “The team had him prepared but he just ran against a horse that was too tough today But there’s no shame in second place in the Kentucky Derby.”

With his third Kentucky Derby win in six years, Baffert joined Ben Jones as trainers with six wins in the Run for the Roses.

Baffert-trained Thousand Words was scratched after nearly flipping over in the paddock about 30 minutes before post time. Baffert assistant Jimmy Barnes suffered a broken hand in the incident.

“It’s a great accomplishment but I’m here because of the clientele and the people around me,” Baffert said.

The third jewel of the 2020 Triple Crown, the Preakness Stakes, will be run Oct. 3 at Pimlico Race Course.