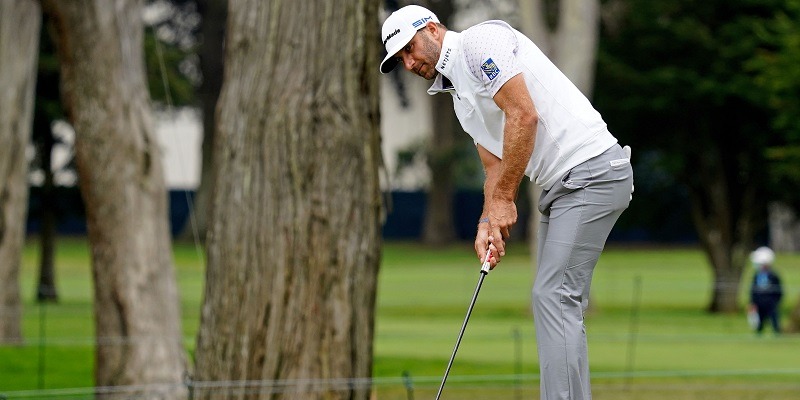 Former World No. 1 Dustin Johnson surged on Saturday at the PGA Championship, piling up eight birdies to shoot 5-under-par 65 and take a one-stroke lead through three rounds in San Francisco.

Johnson, the runner-up in last year’s event at Bethpage Black in Farmingdale, N.Y., sits at 9-under 201 through 54 holes at TPC Harding Park. One stroke back are Scottie Scheffler (who shot 65) and Cameron Champ, who posted a 67 after firing a 64 on Friday.

Back-to-back defending champion Brooks Koepka birdied 18 to cap a round of 69 and tie for fourth place at 7 under. Joining him are Collin Morikawa (65) and England’s Paul Casey (68).

China’s Haotong Li, who led by two entering the day, played the final six holes at 4 over to shoot 73 and tie for 13th at 5 under.

Johnson — currently ranked fifth in the world — had a wild day, misplacing his yardage book and riding a roller coaster through the front nine. He collected four birdies in the first seven holes, along with a bogey at No. 6, before a double bogey at the par-4 ninth after his second shot found a nasty greenside bunker.

But Johnson bounced right back with a birdie at the par-5 10th, then added three more in a span of four holes starting at No. 14, finishing the back nine bogey-free.

“I putted really well,” the 36-year-old told reporters afterward. “That was key. But I hit a lot of good shots to give myself some good looks because the flags are tucked. The greens are firm and fast. So I did hit a lot of quality iron shots.”

Johnson is no stranger to leading major tournaments through 54 holes. He has finished second at all four majors, with his lone victory coming at the 2016 U.S. Open.

“I’ve been in contention a lot, and I’ve got it done a lot of times,” he said. “Tomorrow, it’s no different. I need to be out — I’m going to have to play good golf if I want to win. It’s simple. I’ve got to hit a lot of fairways and a lot of greens.”

Scheffler would have held a share for the lead but for a bogey at 18, halting his momentum after he had birdied the previous three holes. He joined Johnson in totaling eight birdies on the day.

Champ reached 9 under for the tournament with birdies at 12 and 14, but he dropped a shot at 15 and parred the final three holes to share second.

Koepka, who is attempting to become just the third three-peat champion at a major in the past 100 years, had a bogey-free round of 2 under through 12 holes and held a share of the lead at 8 under for the tournament.

He lost position by making three straight bogeys starting at 13, then recovered with birdies at 16 and 18 to get into a tie for fourth.

Morikawa had two blemishes on his day, making back-to-back bogeys at 12 and 13, but he birdied three in a row starting at 15.

Casey was 2 under through nine holes before he parred the entire back nine.

World No. 1 Justin Thomas carded a 68 and sits in a tie for 34th at 1 under. He was 5 under through seven holes, but he made four bogeys and just one birdie the rest of the way.

“That was really disappointing to finish the way I did today,” Thomas told ESPN after his round. “I felt like being 5 under after 7, I could have shot 62 and watch those guys play. It’s a bummer and I potentially cost myself a chance to win this thing.”

Phil Mickelson shot even-par 70 and is 1 over after his three rounds, while Tiger Woods is 2 over after recording his second straight 72.

“Just like yesterday, I didn’t make any of the putts to get momentum going and to get the round started,” Woods told CBS. “I fell behind and had to fight back.”