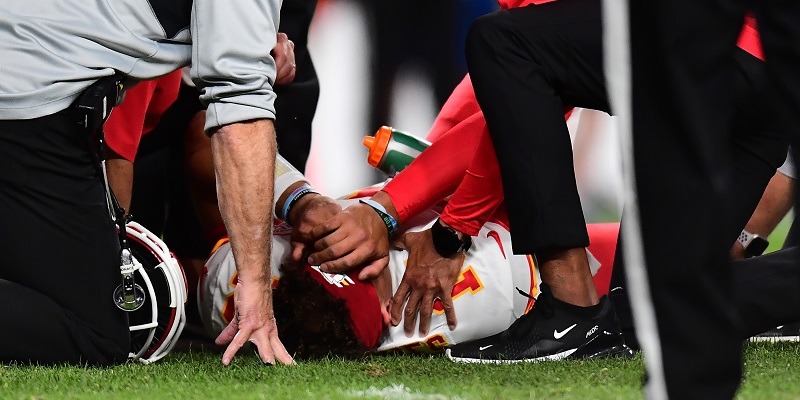 Mahomes left Thursday night’s victory over the Denver Broncos after suffering a dislocated right kneecap. As the team awaited the results of an MRI exam, Caesers was among the sportsbooks to temporarily remove the Chiefs from their Super Bowl futures table.

The Chiefs were being offered at around +800 odds by most books before the injury. With Mahomes now expected to miss around three games, PointsBet is offering Kansas City at +1000 and DraftKings at +1100.

K.C. throttled Denver 30-6 behind backup Matt Moore and remains in control of the AFC West at 5-2. The big question will be how Moore and the Chiefs weather the next month with home games against Green Bay and Minnesota followed by road trips to Tennessee and then Mexico City to face the Chargers before Kansas City’s bye week.

Home-field advantage could be up for grabs during that stretch, with Baltimore and Houston both entering their Week 7 games atop their respective divisions at 4-2.

The 6-0 New England Patriots remain the heavy betting favorites at +230 by PointsBet and +225 by DraftKings. Both books have New Orleans as the current favorite in the NFC at +700. PointsBet has the Chiefs’ current odds tied for the third-lowest along with San Francisco at +1000, while DraftKings has the Chiefs, 49ers and Packers each at +1100.

Meanwhile, Mahomes’ MVP odds did take a more significant hit. The favorite by most books before the injury, he is now third behind Seattle Seahawks quarterback Russell Wilson (+150) and Houston Texans quarterback DeShaun Watson (+300) by DraftKings, who are offering Mahomes at +700.

PointsBet and FanDuel had yet to repost their MVP odds as of Friday afternoon, but Mahomes’ odds dropped even further with Fox Bet, where Wilson (+150) and Watson (+300) lead the way followed by Mahomes, Carolina Panthers running back Christian McCaffrey and Green Bay Packers quarterback Aaron Rodgers all at +900.