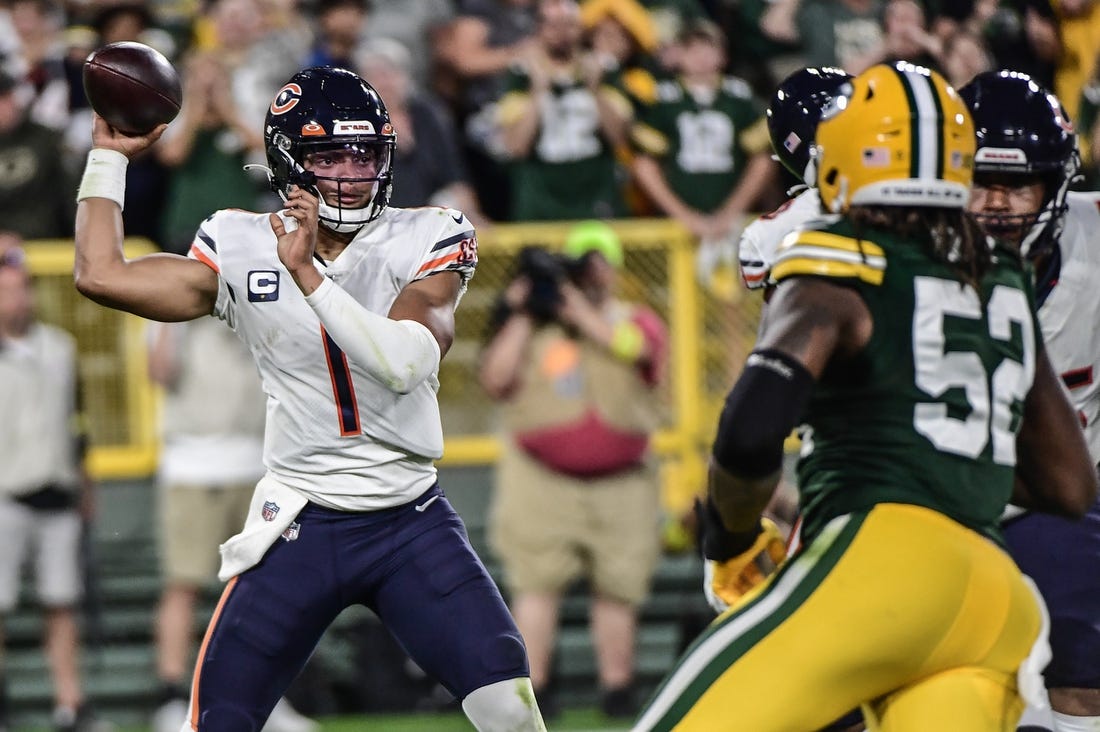 For NFL quarterbacks, the road to proficiency is long and arduous, a fact that second-year signal callers Justin Fields and Davis Mills can confirm.

With both coming off subpar showings, Fields and Mills will square off Sunday when the Chicago Bears host the Houston Texans.

Fields attempted only 11 passes in the Bears’ 27-10 loss to the Green Bay Packers last Sunday, matching his lowest total as a starter and marking the fourth time he has attempted fewer than 20 passes in a start in his brief career.

Two of those occasions have come this season, as Fields has attempted just 28 passes while throwing for 191 yards through the first two games. Those conservative totals, coming on the heels of his uneven rookie season, have yielded questions concerning whether Fields has the trust of his coaching staff, namely offensive coordinator Luke Getsy.

“Everybody in the building knows that Luke knows what he’s doing,” Fields said. “We put full trust in him knowing that he’s going to put us in the best position to win. If our offensive coordinator thinks the plays he’s given me are going to help us win the game, that’s all I care about.”

The Bears (1-1) rushed for 180 yards on 27 attempts against the Packers, paced by David Montgomery, who finished with 122 rushing yards, and Khalil Herbert, who added 38 on just four attempts. The Bears’ lone touchdown came via Fields’ 3-yard scoring run in the first quarter.

If Chicago is reluctant to let Fields orchestrate the offense, its ground attack appears solid enough to provide him some temporary cover.

“There’s a commitment first off to it, it’s declared,” Texans head coach Lovie Smith said of the Bears’ run game. “You look at the last game, it showed two excellent running backs, an offensive line that blocks, an athletic quarterback that can cause problems that will open up some things with that.

“It will be a big challenge for us. We haven’t played our best ball versus the run, haven’t tackled as well as we need to. All of those things should come into play this week.”

Mills leads an offense that mustered only two red-zone opportunities in two games while converting just 7-of-28 third-down attempts. Houston ranks 29th in offense with 533 yards. Mills’ 5.6 yards per completion ranks above one other quarterback with two starts this season: Mitch Trubisky of the Pittsburgh Steelers.

How much responsibility Mills shoulders in advancing the Texans (0-1-1) offensively is up for debate given his relative inexperience. To Mills’ credit, he understands that the buck stops with him.

“Just keep straining, try to make plays,” Mills said. “We do it out here in practice. We did it all camp, throughout preseason, just got to execute once we get in the games. It starts with me. I’ve got to make all the throws and I haven’t done that. Just got to keep pushing for what we’ve been training for and I think we’re ready to perform. We’ve just got to do it.”