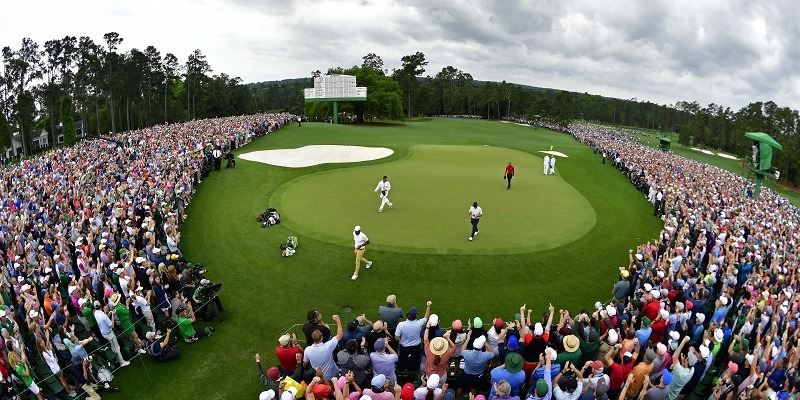 The PGA Tour plans to be back on the tee box in June and has rescheduled three majors, including a mid-November edition of The Masters Tournament.

Originally scheduled to start Thursday, the Masters was rescheduled to November 12-15 in Augusta, Ga., which will be in stark contrast to the traditional early spring date.

“We have identified Nov. 9-15 as the intended dates to host the 2020 Masters,” Augusta National chairmain Fred Ridley said in a statement. “We hope the anticipation of staging the Tournament brings a moment of joy to the Augusta community and those who love the game.”

“We have identified Nov 9-15 as the intended dates to host the 2020 Masters. We hope the anticipation of staging the Tournament brings a moment of joy to the Augusta community and those who love the game.”

In a joint statement from Augusta National Golf Club, European Tour, LPGA, PGA of America, PGA TOUR, The R&A and USGA on Monday, many schedule changes were announced including the cancellation of the 149th Open Championship.

“This is a difficult and challenging time for everyone coping with the effects of this pandemic. We remain very mindful of the obstacles ahead, and each organization will continue to follow the guidance of the leading public health authorities, conducting competitions only if it is safe and responsible to do so,” the statement read.

“In recent weeks, the global golf community has come together to collectively put forward a calendar of events that will, we hope, serve to entertain and inspire golf fans around the world. We are grateful to our respective partners, sponsors and players, who have allowed us to make decisions – some of them, very tough decisions – in order to move the game and the industry forward.

“We want to reiterate that Augusta National Golf Club, European Tour, LPGA, PGA of America, PGA TOUR, The R&A and USGA collectively value the health and well-being of everyone, within the game of golf and beyond, above all else. We encourage everyone to follow all responsible precautions and make effort to remain healthy and safe.”

The leading organizations in the sport have collaborated to announce a revised golf calendar for 2020. https://t.co/3tisvHhZ0D

The PGA Tour is working to confirm several dates, including an event ending June 21 that would replace the reschedule U.S. Open and be held without fans on the course.

The first “confirmed” event, per the Tour, is the PGA Championship at TPC Harding Park in San Francisco the week of Aug. 3. The following week marks the start of the FedExCup Playoffs at the Wyndham Championship.

“The Tour will seek to reschedule tournaments into the weeks formerly occupied by the U.S. Open, The Open Championship and the Men’s Olympic golf competition in June and July,” the PGA Tour said in a statement. “The TOUR will make further announcements about this potential, as well as its fall schedule, in the coming weeks.”

The LPGA released a revised schedule with the opening week on June 15 with the Walmart NW Arkansas Championship.

On Monday, the LPGA Tour announced that it has successfully rescheduled its first two majors of the year (the ANA Inspiration moves to the week of September 7 at Mission Hills Country Club in Rancho Mirage, California; and the U.S. Women’s Open conducted by the USGA moves to the week of December 7 at Champions Golf Club in Houston, Texas).

In the statement Monday, PGA Tour Commissioner Jay Monahan said, “Due to the many complexities involved, the European Tour is currently working through various scenarios in relation to the rescheduling of our tournaments for the 2020 season. The European Tour will make further announcements on these in due course.”

“We want to emphasize that our future plans are incumbent upon favorable counsel and direction from health officials,” Ridley said. “Provided that occurs and we can conduct the 2020 Masters, we intend to invite those professionals and amateurs who would have qualified for our original April date and welcome all existing ticket holders to enjoy the excitement of Masters week.”

Ridley also confirmed that the 2020 August National Women’s Amateur has been canceled.

“Ultimately, the many scheduling challenges with NCAA tournaments, the World Amateur Team Championships, the LPGA Q-Series and other events when women’s amateur golf resumes led to this decision,” he said.