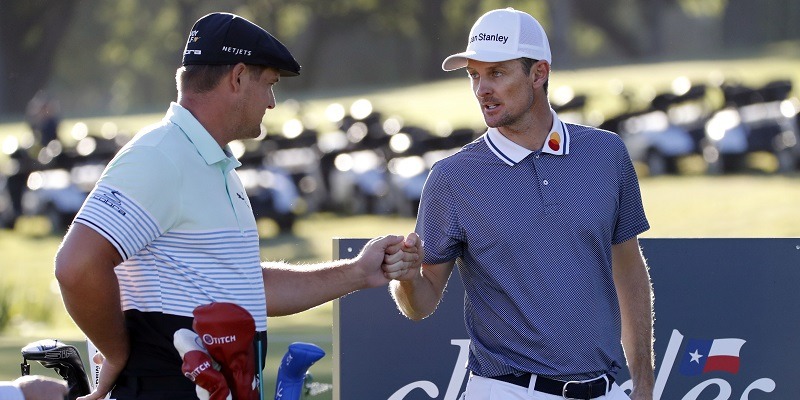 Justin Thomas drained a birdie putt on the second hole Thursday, reached down to pluck his ball out of the cup and acknowledged the nonexistent crowd with a raise of his hand.

It was a nod to the unique circumstances in which the PGA Tour returned to action. The 91 days between competitions due to the coronavirus pandemic was the longest on Tour since World War II.

A tee time was left open for a moment of silence in honor of George Floyd — a stark reminder of the complex world the Tour is navigating as one of the first major sports to return to action in the United States.

There was no announcement of his name to the gallery because there were no fans.

No handshakes or fist bumps between players. No nods or tips of the hat to an adoring crowd.

Rory McIlroy and Brooks Koepka asked a marshal who was supposed to tee off first while the Golf Channel showed soccer star Harry Kane and New York Giants running back Saquon Barkley remotely introduce them to the television audience.

“It felt strange to be honest,” Jhonattan Vegas said after his 6-under-par 64. “Just kind of getting on the first tee and having your name called and not having anyone around to say anything, it felt like, ‘Hey, what’s going on here?’

“It’s something we’re going to have to get used to for a little while, and it’s going to be hard because sometimes you hit shots that are good and you might not see where the ball ended up and you don’t know how close or how far you fit it, so we definitely miss the fans.”

There was an abundance of great shots executed under ideal conditions on Thursday. And the wayward shots were chased and marked by marshals for players to quickly find.

“It’s certainly awkward not having everybody out here,” Phil Mickelson said after his 1-under 69. “But I’m certainly proud of the steps the PGA Tour has taken to have everybody be safe, feel safe in this environment and to hopefully entertain and have some people watching on TV even though they’re not here.”

The Golf Channel’s broadcast featured each of the top four players in the world. It also depicted a far different experience from pre-pandemic events.

Many television angles showed players on holes in the background because, well, there were no fans to block the view. And no fans to block an approach shot defending champion Kevin Na shanked off the hozzle.

The visual could have been from a standard Thursday at your local private course (not your muni, the Colonial is in absolutely pristine condition).

“I told my caddie early on, I didn’t feel like I was hitting it as far because my adrenaline wasn’t up,” said reigning U.S. Open champion Gary Woodland. “It’s a big deal.

“Especially when you play with Phil and you get some of those big groups, you get so much adrenaline, the golf ball seems like it goes miles. It felt like kind of a practice round out there, same kind of energy. But it was kind of peaceful, kind of going back to college days and you kind of roll with it and stay within yourself a little bit more, and you really don’t get distracted.”

After the initial shock value, it was easy to settle back into the groove of watching an elite field return to competition.

And there were your typical markers of a regular PGA Tour event:

Jordan Spieth having a dialogue with himself after a disappointing shot.

Dustin Johnson grinding out a 1-over 71 that could have been much worse.

Most important, the intensity of competition was palpable despite the lack of a crowd. This wasn’t a charity event with players exchanging barbs for the TV audience.

It’s a two-month sprint to the FedEx Cup playoffs, with crucial points also on the line for a potential Ryder Cup in September. The first major of the year is in less than two months.

The players have a lot to play for and a short window of time to get their games back into form.

“There were a few times where I thought about it, and it reminded me of U.S. Open qualifiers,” Bryson DeChambeau said after his 5-under 65. “There was a couple people out there but no fans.

“It was interesting, but nice to not have to worry about anybody saying something weird or — I appreciate the fans, I love what they do. I just hope to keep — I hope they can come back soon, and I hope to have good times with them.”

–Derek Harper (@DerekAHarper) is the CEO of Field Level Media