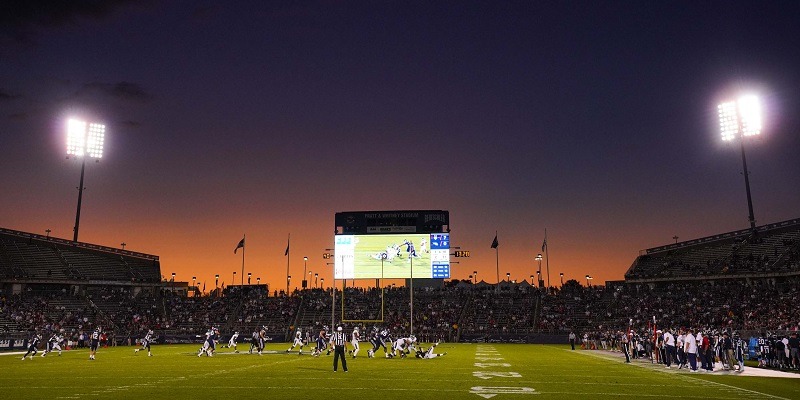 The University of Connecticut became the first FBS program to suspend its 2020 football season due to the coronavirus pandemic.

The Huskies were preparing to play their first season as an independent after leaving the American Athletic Conference last month. However, Gov. Ned Lamont had expressed concern about the team traveling to play in any state with a high COVID-19 infection rate.

UConn already had four opponents remove them from the schedule and other games were in jeopardy with several Power 5 programs moving to conference-only schedules. Lamont had said the Huskies would be subject to the state’s 14-day quarantine rule upon its return from any out-of-state games.

Illinois, Indiana, Maine and Mississippi had already removed UConn from their 2020 schedules, and games against ACC schools North Carolina and Virginia were uncertain.

The Huskies returned to campus last month and no one has tested positive for COVID-19, according to school officials. Coach Randy Edsall said he consulted with players before the final decision was made to suspend the season.

”We engaged and listened to the concerns of our football student-athletes and feel this is the best decision for their health, safety, and well-being,” Edsall said. ”Our team is united in this approach and we will use this time to further player development within the program and gear ourselves to the 2021 season.”

The university said members of the football team will remain enrolled in school and have access to facilities and academic support services.

“The necessary measures needed to mitigate risk of football student-athletes contracting the coronavirus are not conducive to delivering an optimal experience for our team,” Benedict said. “Ultimately, the student-athletes would rather preserve their year of eligibility with an eye to competing under more typical circumstances during the 2021 season.”

UConn went 2-10 in its final season as an AAC member and is 6-30 in three years since Edsall returned. The Huskies’ last winning season came when Edsall led them to an 8-5 record in 2010 before leaving for Maryland.

The university is required to pay a $17 million exit fee to the AAC by 2026, and is joining the Big East for all sports other than football, men’s and women’s ice hockey and rowing.