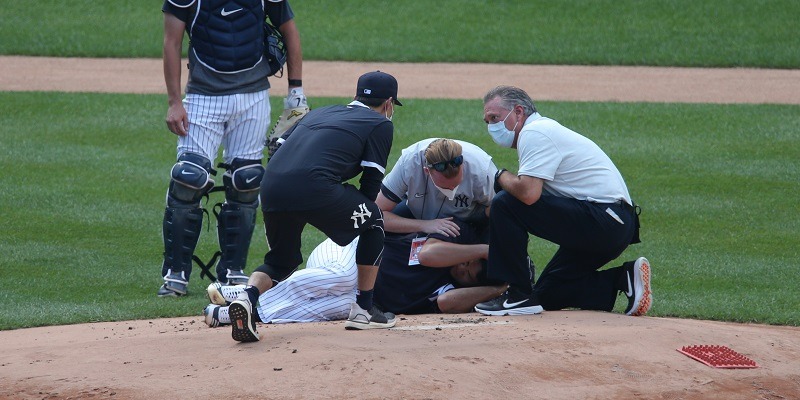 New York Yankees right-hander Masahiro Tanaka was released from the hospital early Saturday night, hours after being struck in the head by a line drive from teammate Giancarlo Stanton during the team’s training camp on Saturday afternoon.

Shortly after leaving the hospital, Tanaka tweeted an update: “I appreciate all the support. I feel it a bit right now, but I’m all good. Going to try to get back on the mound ASAP! Thanks again for all the encouraging words!”

I appreciate all the support. I feel it a bit right now, but I’m all good. Going to try to get back on the mound ASAP! Thanks again for all the encouraging words!

Trainers and teammates immediately ran to the mound at Yankee Stadium to assist Tanaka, who remained on the ground for several minutes. The Japanese hurler was able to walk off the field with some assistance.

Masahiro Tanaka was hit in the head with a line drive from the bat of Giancarlo Stanton during a simulated game.pic.twitter.com/biProHbgeK

The Yankees took Tanaka to New York-Presbyterian Hospital for further testing. While Tanaka was still at the hospital, Yankees manager Brett Boone told reporters during a virtual news conference that all tests on Tanaka had come back clean and that his concussion-like symptoms had subsided.

Boone added that Tanaka will be placed in the concussion protocol, but said everything appeared that Tanaka would be OK after speaking with Yankees director of sports medicine and rehabilitation Mike Schuk, who was at the hospital.

“When I spoke with Mike, he said Masa is basically normal right now as far as conversation and he seems fine, but we’ll continue to monitor him,” Boone told reporters.

“The first thing when something like that happens is you worry about a guy’s life,” Boone added. “Those are the scary moments (where) that’s your immediate focus and reaction, hoping and praying that he’s OK.”

The incident marred the Yankees’ first official workout since the coronavirus pandemic shut down the sport in March.

Boone said that the club gives pitchers the option of using a screen or not when throwing live batting practice, and Tanaka chose not to.

“Obviously it’s incredibly unfortunate what happened today,” Boone said, before later adding, “Unfortunately that’s sometimes the risk that goes along with it. You do your best to protect guys, but you’re not going to have a screen out there all the time.”