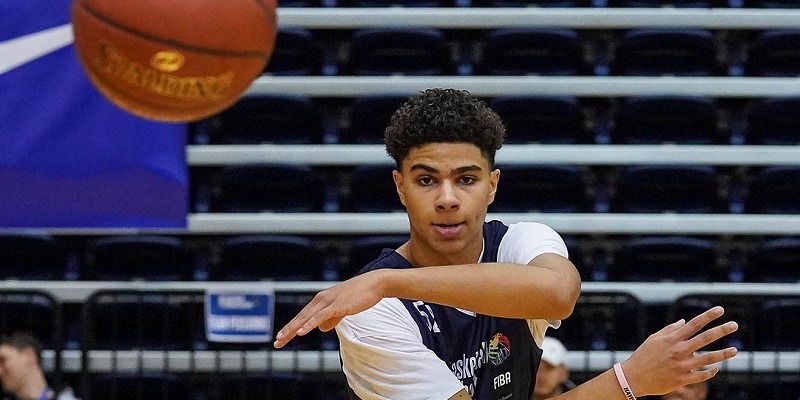 Hayes is an 18-year-old Frenchman who most recently played for Ulm, a decent team in Germany. For comparison, the Oklahoma City Thunder’s Dennis Schroder, one of the NBA’s best sixth men this season, previously played for the same league, the BBL.

Hayes won’t enter the NBA with the hype of fellow European point guard Luka Doncic. But Hayes has already demonstrated a high basketball IQ at a young age, making him a natural playmaker. He is also a committed defender, which is not always the case for teenagers.

Hayes also possesses good size at 6-feet-5 and 215 pounds. He averaged 12.8 points and 6.2 assists per game for Ulm this past season.

D’Angelo Russell, an All-Star in 2019, is a common comparison for Hayes.

Hayes’ age means he is still a raw prospect. Most notably: He is so left-hand dominant that it can be detrimental.

Yet Hayes is a crafty ballhandler who can create shots for himself and teammates, particularly in the pick-and-roll and off a drive-and-kick. His turnover numbers declined throughout his season with Ulm. He also has the size and fearlessness to finish at the rim and through contact.

Hayes shot 39.0 percent from 3-point distance this season. But he was much better off the dribble than in catch-and-shoot situations. Watch him whip out a step-back move, then launch with his left hand, and it’s no surprise Hayes models his game after James Harden. That creative footwork at a young age is a big reason why Hayes is such an enticing prospect.

Hayes is also already a great on-ball defender and has the frame to guard multiple positions.

Entering the draft, LaMelo Ball certainly has more name recognition than Hayes. Tyrese Haliburton might be a safer pick. But Hayes could be the point guard in this class with the most potential.