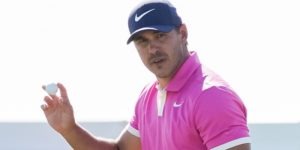 Brooks Koepka followed a runner-up finish by being in contention at last week’s PGA Championship before stumbling on Sunday.

Despite the strong recent results, bettors are not flocking to the 30-year-old in a modest field at this week’s Wyndham Championship in Greensboro, N.C.

Koepka will be teeing it up for the sixth consecutive week and is one of only three top-10 players in the field. He is the second betting favorite at most all sportsbooks, but bettors aren’t flocking to the action. Koepka was responsible for only six percent of the handle and five percent of the outright winner bets at DraftKings as of Wednesday afternoon.

Simpson, the sixth-ranked player in the world, was +1050 at the book. Savvy bettors know that Simpson is from nearby Raleigh, N.C. and has a win and a pair of runner-up finishes among his seven top-10 finishes in 11 career starts at Sedgefield Country Club.

Koepka is +1200 at DraftKings. However, he hasn’t played in the event since 2015 and while Koepka has seven career PGA Tour wins, that’s a relatively modest total for a four-time major champion.

Koepka has a reputation for working on his game during regular Tour stops to build toward the bigger events, and this is the final event before the FedEx Cup playoffs.

Rose was also in contention until late on Sunday until settling for ninth place at TPC Harding Park, and was responsible for nine percent of the handle and five percent of the total bets at DraftKings.

Fleetwood is playing for the fourth consecutive week since traveling over from Europe ahead of the busy slate of marquee events that began with the PGA Championship. He has yet to win on U.S. soil, but has improved his results each of the past three weeks. Bettors have taken notice, with Fleetwood bringing in six percent of the handle and five percent of the total bets.

Another popular bet has been Brendon Todd.

Todd’s 69.0 first-round scoring average is tied for fifth on the PGA Tour this year. He was tied for the lead after the first round last week and was two shots off the opening-round lead the week before.

Another player more popular among betters than Koepka has been Kevin Kisner (+2900, six percent of handle, five percent of bets). The Aiken, S.C. native has also enjoyed consistent success over the years at Sedgefield. Like Todd, Kisner was +5000 to lead after the first round, but only three percent of the total bets were coming in on him.