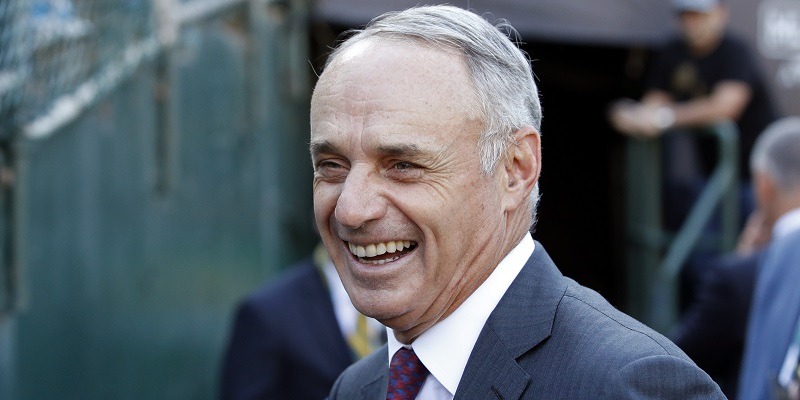 Commissioner Rob Manfred said “there is no reason to quit now” despite a wave of postponements due to positive coronavirus tests in the early going of the 60-game season.

“We are playing,” Manfred told ESPN’s Karl Ravech on Saturday. “The players need to be better, but I am not a quitter in general and there is no reason to quit now. We have to be fluid, but it is manageable.”

The latest scheduling disruptions were the postponement of Saturday night’s game in Milwaukee between the Brewers and St. Louis Cardinals, and then their doubleheader scheduled for Sunday. The latter postponement was announced hours after Manfred’s comments.

Friday’s game was postponed after two Cardinals players tested positive for COVID-19. Follow-up rapid testing on the entire St. Louis team revealed that one additional player and multiple staff members may be positive, pending the results of saliva tests.

No makeup dates for the Cardinals and Brewers have been scheduled, but both teams are scheduled to resume action quickly.

The league announced earlier Saturday that the Philadelphia Phillies will resume play on Monday against the host New York Yankees, while the Miami Marlins will return to the field Tuesday against the Orioles in Baltimore.

The Phillies and Yankees will play a four-game home-and-home series: Monday and Tuesday at Yankee Stadium, and Wednesday and Thursday at Citizens Bank Park. The Marlins and Orioles will play four games in Baltimore from Tuesday to Thursday, including one doubleheader.

The Phillies and Marlins have not played since finishing their season-opening three-game series in Philadelphia on July 26. A total of 18 Miami players tested positive, as did one coach and one staff member for Philadelphia.