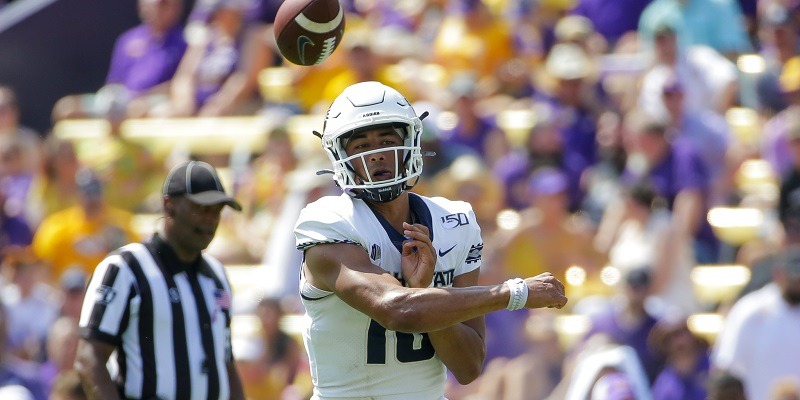 In what felt like one of the more unpredictable NFL drafts in years, the first round Thursday night actually began mostly chalk.

However, the variability picked up shortly outside the top 10, with some surprises in the deep receiver and cornerback classes, and then flourished with a stunning trade up by the Green Bay Packers to grab Aaron Rodgers’ heir apparent.

That’s where we’ll begin with Round 1’s biggest takeaways.

The Packers have obviously been here before, with Aaron Rodgers arriving as a top draft pick to succeed Brett Favre, but that doesn’t mean the trade-up for Utah State’s Jordan Love will work out.

With incredible talent but ghastly decision-making, Love might be the biggest risk in the draft. Green Bay is a great landing spot for him because he now has time to develop, but does that justify the Packers’ gamble?

I’m not so sure. Rodgers needs more weapons, and Green Bay’s defense needs reinforcements after being overrun in last year’s NFC Championship Game. Instead, the Packers’ best asset (and a fourth-round pick traded away) won’t pay any dividends at least two to three years, and Rodgers gets less support in the back end of his career.

If Love delivers, the Packers might have secured sustained success at quarterback for a span of four to five decades, dating to Favre’s arrival. If he busts, things will get awfully ugly. The stakes are sky high.

With two first-rounders but no other picks until Round 5, the Niners moved down from No. 13 to No. 14, adding a fourth-rounder and taking South Carolina defensive tackle Javon Kinlaw to replace DeForest Buckner. But San Francisco quickly gave away that pick, and a fifth-rounder (No. 176), to move up six spots at the bottom of Round 1 for Arizona State wideout Brandon Aiyuk.

Kinlaw and Aiyuk are bold choices, too, as incredibly talented but raw players. Kinlaw might be a Chris Jones clone, but he’s unpolished and undisciplined against the run. Aiyuk fits Kyle Shanahan’s offense with after-the-catch prowess, but he’s a raw route-runner. The 49ers could have nabbed a more polished (and arguably better) duo by taking CeeDee Lamb at No. 14 and Ross Blacklock at No. 31 (with no trade-up) instead.

Teams with stacked rosters can afford to take risks, and the Niners certainly swung for the fences. But having fewer picks means you have to hit.

Jockeying for divisional position after 7-9 campaigns, the Las Vegas Raiders and Denver Broncos both needed receiving help. The Raiders had better draft position (thanks to a two-point conversion failure at Denver in Week 17), but did they maximize it?

At No. 12, Las Vegas drafted Alabama’s Henry Ruggs, the blazing-fast but less productive teammate of Jerry Jeudy, one of the best route-runners in recent memory. Jeudy surprisingly slipped to No. 15, where Denver snapped up arguably the steal of Round 1 and a perfect complement to Courtland Sutton.

Ruggs is an underrated route-runner and clearly more than a speed threat, but he has a long way to go to become Tyreek Hill or DeSean Jackson. Jeudy’s timed speed (4.45-second 40-yard dash) can’t match Ruggs’ (4.27), but the gap in play speed is much smaller, and Jeudy repeatedly won vertically in college. Jeudy also appears more agile laterally, and his bag of tricks is deeper than Santa’s sack. These two will now be compared to one another for years.

Meanwhile, after Denver got tremendous value in Jeudy, Las Vegas followed four picks later with one of the biggest reaches of Round 1, taking Ohio State cornerback Damon Arnette at No. 19 when most had him pegged for Round 2 or 3. It felt as if Al Davis were running the Raiders’ war room again.

Those were hardly the only fireworks in the division, with the Los Angeles Chargers adding two major talents and the Kansas City Chiefs’ offense getting more dangerous. More on both of those below.

The Carolina Panthers passing at No. 7 is harder to explain (see below), but the Arizona Cardinals capitalized, nabbing a supersized version of Derwin James. Coordinator Vance Joseph’s scheme isn’t overly creative, but he mixes personnel well, and Simmons will be a weapon in all sorts of roles depending on the situation.

Perhaps even bigger winners were the Minnesota Vikings, who might have gotten the most value of any team in Round 1 of the draft. LSU wideout Justin Jefferson could have gone as high as No. 13, and the Vikings could have panicked and traded up in front of Philadelphia at No. 21. Instead, they got him at No. 22.

Then Minnesota capitalized on the 49ers’ aggressiveness, adding fourth- and fifth-round draft picks to move down six spots. The Vikings still got a much-needed cornerback in TCU’s Jeff Gladney, a speedy, ultra-competitive cover man who fits perfectly in Mike Zimmer’s defense.

Derrick Brown should be a very good player for the Panthers, but picking him over Simmons was a major question mark. Brown is a dominant run defender but a solid-not-standout pass rusher. He relied heavily on power in college, which won’t always be enough in the pros.

Brown likely won’t bust, but it’s very possible he tops out as merely a plugger and pocket pusher. That would be especially disappointing if Simmons, practically born to thwart modern passing attacks, delivers on his potential.

On the other end of the spectrum, the Chargers added a ton of upside, but I’m far from sold on their picks. Oregon quarterback Justin Herbert and Oklahoma linebacker Kenneth Murray are physical marvels, but they both have questionable instincts.

Herbert is brilliant, but he doesn’t process as quickly as you’d expect for a four-year starter, and his elite physical tools rarely translate to off-schedule playmaking as you’d hope. Meanwhile, Murray’s tape is littered with false steps, and while he’s fast, he rarely shouldered much of a coverage burden.

With the Dolphins staying put at No. 5, the Chargers could have stolen Alabama’s Tua Tagovailoa instead of Herbert with a small trade-up. Instead, they took Herbert and gave up a third-rounder to trade up for Murray. That’s just too risky in my book, especially if those players’ instincts don’t develop quickly.

A few other picks Thursday night really stood out as ideal fits, regardless of the value on the draft board.

The Cleveland Browns might have preferred a college left tackle (Georgia’s Andrew Thomas) to Alabama’s Jedrick Wills, but Wills’ transition from the right side to the left should be smooth. Not only is his position coach the renowned Bill Callahan, but legendary blind-side blocker Joe Thomas has pledged to help Wills. Oh, and Wills will play next to a rock solid left guard, Joel Bitonio.

Iowa’s Tristan Wirfs won’t have to switch sides in Tampa Bay. He slots straight in at right tackle for the Buccaneers, filling their biggest need with a great value and high upside.

Some pegged TCU wideout Jalen Reagor as a reach at No. 21, but he is absolutely electric, bringing much needed explosion to Philadelphia. He can play outside but will be weaponized in the Eagles’ offense, with more work in the slot and myriad gadget plays. Reagor also attacks jump balls with rare fearlessness for a 5-foot-11 guy.

LSU linebacker Patrick Queen isn’t a banger, but that’s the only real hole in his game. He’ll stay clean behind the Baltimore Ravens’ beefy D-line, free to trust his instincts and fly sideline to sideline. He’s also a terrific blitzer and sharp as a zone-match cover man, both key parts of Baltimore’s scheme.

The defending Super Bowl-champion Chiefs made the league’s best offense even better with LSU’s Clyde Edwards-Helaire, an undersized, stocky back with terrific agility, sharp receiving skills and underrated power. If that sounds familiar, it should — Edwards-Helaire is awfully reminiscent of Brian Westbrook, one of Andy Reid’s best weapons during his time in Philadelphia.