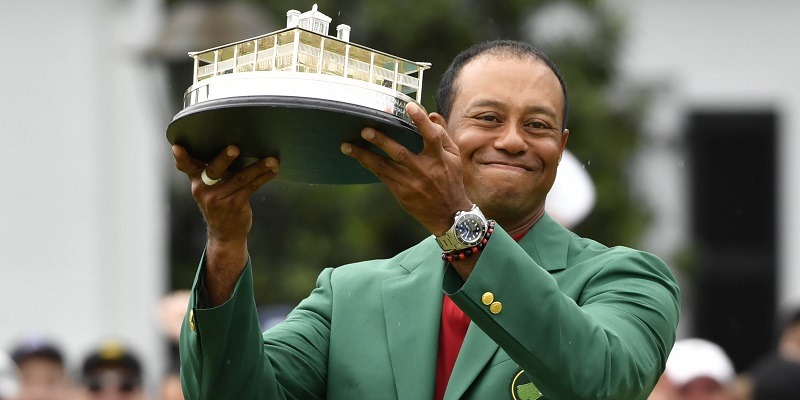 Tiger Woods served himself a Champions Dinner and is toasting to good health on what would have been the first day of his latest go-round at The Masters Tournament.

Woods has been idle since Feb. 16, skipping The Players Championship and WGC-Mexico with back stiffness before the coronavirus pandemic threw the PGA Tour schedule — and the rest of the world — for a loop.

Woods told GolfTV he is using the down time to his full advantage.

“Night and day. I feel a lot better than I did then,” Woods said from his Florida home. “I’ve been able to turn a negative into a positive and been able to train a lot and get my body to where I think it should be at. I’ve been able to play some golf. Fortunately, Medalist Golf Club is still open here — virtually every course to the south of us is closed — but we remain open, so it’s been nice to go out there and hit some golf balls a little bit.

“You need to get some fresh air and do something. Obviously we have our social distancing; you can’t touch rakes or touch the flags. One person per cart, but at least the members and their kids are able to play a little bit, get out there and do something active. Some want to walk the dog, some want to roam the golf course, just doing some daily activity to get some exercise and give you peace of mind.”

Masters Champions Dinner quarantine style. Nothing better than being with family. pic.twitter.com/xPK769CWCf

Woods finished 68th at the Genesis Invitational in February after a top-10 at the Farmers Insurance Open.

But he was ready to be at Augusta National earlier this week and at the first tee box on Thursday. Instead, on Monday, Augusta National and the PGA were part of an announcement outlining the goal of a rewired event schedule starting in June. The Masters is now scheduled for November.

“I was talking to JT (Justin Thomas) about this the other day and I felt energetic, I felt really alive and wired and kind of irritable and I didn’t know what was going on,” Woods, 44, said. “And I realized it was Sunday morning. I was supposed to be flying out to an event to hand out trophies to all the award winners. And my body, subconsciously I knew I was supposed to be getting ready to leave and start playing the Masters.

“This is not the way that I would’ve wanted to keep the jacket for a longer period of time,” Woods said. “I wanted to get out there and compete for it and earn it again, like I did in ’02 (defending the jacket he won in 2001). But it’s not a normal circumstance, it’s not a normal world. It’s a very fluid environment, and it’s very different for all of us. Fortunately, we potentially could have a Masters in November and play it then. I guess I’ll be defending then, and hopefully that all comes about.”

Woods would have been responsible for the menu at the annual Champions Dinner — tentatively slated for Nov. 10 under the redesigned PGA schedule — where the defending holder of the green jacket designs a meal for past champions in Augusta. Woods instead had the meal crafted at home with his family while wearing the green jacket.

“I had exactly the same,” he said of this week’s menu. “We had steak and chicken pieces, sushi and sashimi. We had cupcakes and milkshakes for dessert. So it was exactly what I was going to serve. As I said, Masters dinner quarantine-style with my family. We had a lot of fun, and eventually it got a little bit interesting at the end, a little ugly, where icing was flowing across people’s hair and face.”