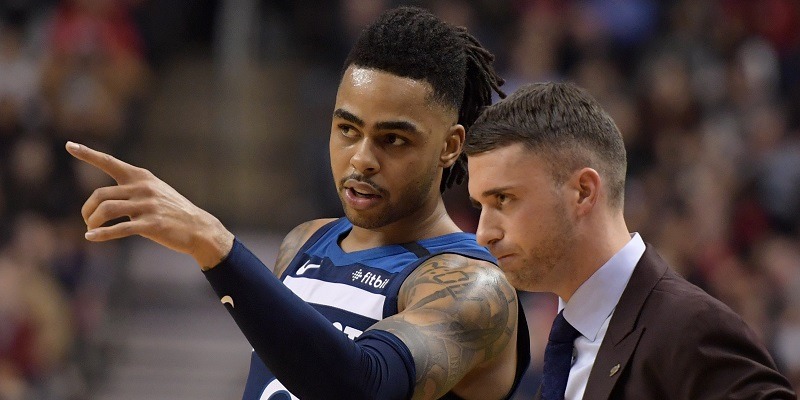 For the second time in six seasons, the Minnesota Timberwolves will make the first selection in the NBA draft.

Minnesota won the draft lottery on Thursday night, with the Golden State Warriors landing at No. 2 and the Charlotte Hornets at No. 3.

The Timberwolves, Warriors and Cleveland Cavaliers and shared the best odds — 14 percent — at winning the lottery and getting the top selection.

“Wow. Super exciting,” Timberwolves guard D’Angelo Russell, who was traded by Golden State to Minnesota in February, said on ESPN. “We trust Gersson (Rosas, the president of basketball operations,) and Ryan (Saunders, the head coach) and all those guys to continue making Minnesota a home for some of the younger guys coming up. …

“The bar is set now. We’re excited to get it going.”

Rosas said in a statement, “We are excited for the possibilities ahead of us to bring in a high caliber player now that we secured the first overall selection. As a front office, we are proud of what we’ve built here in Minnesota so far and we are looking forward to continuing to build upon that foundation in this year’s draft.

“We know with the number one pick we have the opportunity to draft an impact player who could immediately complement our young, strong core in All-Star center Karl-Anthony Towns and All-Star guard D’Angelo Russell.

“The front office and I are prepared to get right to work with this new component for the draft and we’re confident we will be able to bring energy and excitement to our fanbase with our next moves.”

The Atlanta Hawks and Detroit Pistons had greater than a 10 percent chance to land the No. 1 overall pick on Thursday. Charlotte had a 6 percent of coming out on top.

This is the second year of the NBA’s flattened lottery odds. Last year, the system led to drama, and a potential franchise cornerstone for the New Orleans Pelicans in Zion Williamson.

Entering the 2019 lottery, the New York Knicks, Phoenix Suns and Cleveland shared the best odds to land Williamson, whose blend of physical stature, athleticism and marketing potential made him a generational prospect.

Instead, New Orleans (which had a 6 percent chance to pick first) shot up to the top. The Memphis Grizzlies, who had a 6.3 chance to land at No. 2, drafted Ja Morant, the front-runner for Rookie of the Year and a likely franchise cornerstone.

The Los Angeles Lakers, who had a 2.8 percent chance to get the fourth selection, rose to that spot — then included that pick in the package to trade for superstar Anthony Davis.

The lottery odds were based on the pre-shutdown standings.

Unlike the dynamic 2019 combination of Williamson and Morant, there are no clear-cut top prospects in this year’s draft. This group also does not appear to have the depth of a 2018 class that included 2020 All-Stars Luka Doncic and Trae Young, along with promising talents Deandre Ayton, Jaren Jackson Jr., Shai Gilgeous-Alexander, Michael Porter Jr. and Mikal Bridges.

Prospect evaluation has been different for front offices during this cycle, with no NCAA Tournament games to scout, no combine and no in-person workouts due to do COVID-19 precautions.

Here is a breakdown of some of the top available prospects, per various draft evaluators: