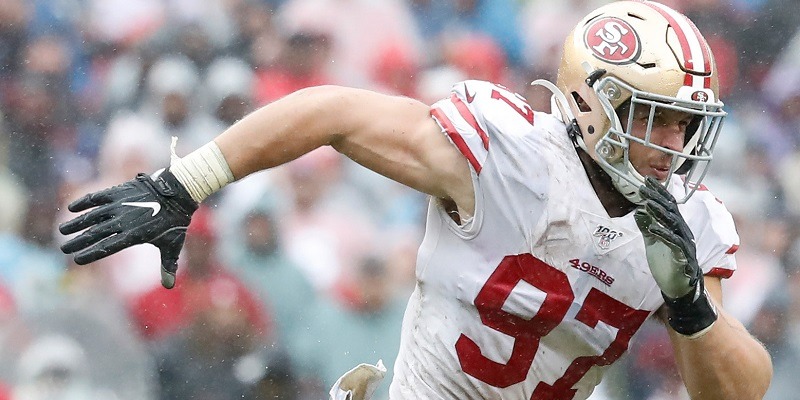 Defensive tackle
Trading DeForest Buckner brought the 13th overall pick in return. With a strong set of edge rushers, look for the 49ers to address the interior defensive line with at least one of their two first-round picks. South Carolina’s Javon Kinlaw is one of the draft’s biggest boom-or-bust prospects.

Wide receiver
Unable to re-sign Emmanuel Sanders, the 49ers need to bolster the talent around Deebo Samuel. Kendrick Bourne returns after tying for the team lead with five receiving TDs. Veteran Travis Benjamin was signed and Dante Pettis will try to emerge from the doghouse, but expect the 49ers to bring in competition through the draft. That could come in the form of Arizona State’s Brandon Aiyuk with the 31st pick.

Cornerback
Richard Sherman has enjoyed two strong seasons since joining the 49ers but he’s 32 and entering the final year of his deal. Ahkello Witherspoon is scheduled to become an unrestricted free agent in 2021.

Offensive tackle
Justin Skule performed admirably, but a long-term replacement for Joe Staley, who turns 36 before the season, should be a priority. Daniel Brunskill is an intriguing internal candidate.

Outside linebacker
Dre Greenlaw played solidly in 2019, but the 49ers were also hit hard at the position by injuries. OLB depth is a clear need in the mid-to-late rounds.

General manager John Lynch has drawn plenty of credit for his three-year run, and rightfully so. Despite missing on his first two picks, he landed an all-time steal in George Kittle, plus useful pieces in Ahkello Witherspoon, Trent Taylor and D.J. Jones in the same draft.

The 2018 draft brought Mike McGlinchey, a likely long-term starter, and Fred Warner, who is among the NFL’s top three-down linebackers.

The 2019 class was Lynch’s best yet, with Nick Bosa already a top-five or top-10 edge rusher and major contributions from Deebo Samuel, Mitch Wishnowsky, Dre Greenlaw and Justin Skule. There were also hits before Lynch arrived — Arik Armstead and Jaquiski Tartt (both 2015) are key contributors.

Best pick: TE George Kittle, R5 2017 — A great athlete who mostly blocked in college at Iowa, Kittle ascended as a receiver faster than expected. He’s one of the NFL’s most unique players.

Worst pick: DE Solomon Thomas, R1 2017 — Thomas and Reuben Foster, both 2017 first-rounders, would fit here. Thomas never quite fit on the edge, but he’s a bit undersized for the interior.