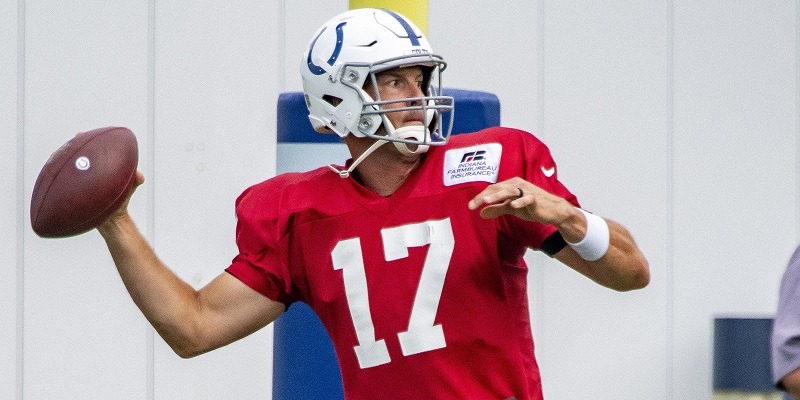 2019 summary: The Colts weathered the blow of Andrew Luck’s retirement surprisingly well at first, opening 5-2. But Jacoby Brissett’s progress stalled and a late-season collapse on defense left Indianapolis outside the playoff picture.

Cause for concern: Rivers has a history of committing turnovers in bunches, so it’s tough to gauge whether his shaky 2019 campaign was a sign of the 38-year-old’s decline or merely a product of poor protection. He now has a great O-line in Indianapolis, so we should find out quickly.

Worth watching: A complete runner with power in short spaces and long-distance speed, Taylor will claim lead-dog status before long. But Marlon Mack is better in the passing game and in ball security, both keys to earning coaches’ trust. There should be snaps featuring both on the field, with Mack lining up all over the formation.

The Colts won seven games with Brissett a year ago, then added Rivers and an elite disruptor in Buckner, all while losing few critical pieces. It requires a leap of faith to back Rivers, but Indy seems more likely to push or go over than hit the under.

2020 forecast: Frank Reich’s scheme and a burly offensive line provide the ideal environment for Rivers, who is still adequate physically and remains sharp as ever above the neck. Buckner — a perfect fit at 3-technique in Matt Eberflus’ defense — could be the piece that pushes the defense to top-10 status. There’s no reason the Colts can’t win the AFC South and make noise in the playoffs.

2019 summary: Mired in a 2-4 start, the Titans turned from Marcus Mariota to Ryan Tannehill at quarterback and caught fire, finishing on a 7-3 run. Workhorse Derrick Henry powered two road playoff victories, but Tennessee blew a 10-point lead at Kansas City in the AFC title game, ending a Cinderella season.

Cause for concern: While the Titans re-signed Tannehill and Henry, they let at least three above-average starters walk for reasonable prices, with their replacements unlikely to provide similar value. Jeffery Simmons is ready to step into Casey’s role, but Wilson and Fulton can’t be expected to match the level of Conklin and Ryan, respectively, as rookies.

Worth watching: Wilson, a 21-year-old who left Georgia as a redshirt sophomore and veteran swing tackle Dennis Kelly battled for the starting job at right tackle. Wilson has the raw ability — especially power in the run game — but he’ll likely have hiccups in protection.

Tennessee went 9-4 with Tannehill as a starter (including playoffs), so the over is tempting, but we’re wary of his 2019 campaign being lightning in a bottle. Given the downgrades elsewhere on the roster, we’re selling on the Titans for now.

2020 forecast: Tannehill should be solid, but he won’t lead the league in passer rating again. An O-line decline without Conklin would affect both Tannehill’s and Henry’s efficiency, which would be a problem for an offense dependent on the run and play-action. The defense should be fine, but questions remain up front and in the secondary. The Titans have work to do to win the division, let alone make it back to the championship game.

2019 summary: Offseason investments and a preseason trade for Laremy Tunsil finally improved Deshaun Watson’s protection, but the defense slipped badly, leaving little margin for error. Houston started hot at Kansas City in the divisional playoffs, only to be overwhelmed when the Chiefs came roaring back.

Cause for concern: The Texans’ run defense cracked last year, and then burly nose tackle Reader left for Cincinnati. Houston’s only addition up front was Blacklock, a talented but undersized rookie more suited to rush the passer than stop the run at this point. This weakness is especially important with J.J. Watt playing more on the edge than inside in recent years.

Worth watching: The Texans always seem to be adequate at tight end without having a real standout, and this year is no different. Can Jordan Akins take a leap in Year 3? Will Kahale Warring emerge after missing his rookie season injured? Or will Bill O’Brien fall back on the steady but limited veteran in Darren Fells?

Bill O’Brien the GM deserves all the criticism he’s gotten, but Vegas might be doubting O’Brien the coach just a bit too much. The Texans have reached nine wins five times in his six years, including all three years before Watson arrived. There’s still enough talent here to go .500 or better.

2020 forecast: As ugly as the Hopkins trade was for Houston, the offense still has plenty of playmakers, and the O-line should be better if Tytus Howard comes back healthy. With Watson running the show, the Texans’ ceiling remains high, but question marks on defense prevent them from being favorites in the AFC South.

2019 summary: The Jaguars’ bet on Nick Foles quickly went bust, and while Gardner Minshew surprisingly impressed as a rookie, the roster’s lack of talent became glaring. Just two years removed from an elite campaign, the defense fell apart, with many key pieces eventually shipped out of town.

Cause for concern: A once-proud defense has been stripped to the bones, and let go of yet another key piece — Yannick Ngakoue — following a public contract stalemate. Even with Henderson on board, the secondary has too many weak spots to match up with most receiving corps. It may get worse before it gets better.

Worth watching: Second-round picks usually fight for starting roles early, but Shenault is a bit unorthodox. While physical and explosive, he was more of an athlete than true wideout at Colorado and still needs ample polish. Can he push Dede Westbrook or Chris Conley for a job early in the season, or will he be primarily a gadget guy as a rookie?

Of all the teams that seem to be playing for the future, Jacksonville seems most committed, perhaps eyeing the loaded 2021 quarterback class. It’s hard to see this team winning more than five games.

2020 forecast: There’s a scenario in which Minshew engineers a few fourth-quarter comebacks and the Jaguars stay in the division race through midseason. More likely, though, the second-year mustachioed signal-caller won’t get enough help from his offense or defense, and the Jags will be cellar-dwellers. If injuries hit hard, things could get really ugly, as there isn’t much depth available.