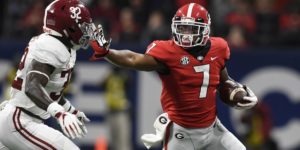 Running backs went untouched during the first round of the 2020 NFL Draft, but the position figures to be a popular one when the draft resumes on Friday night.