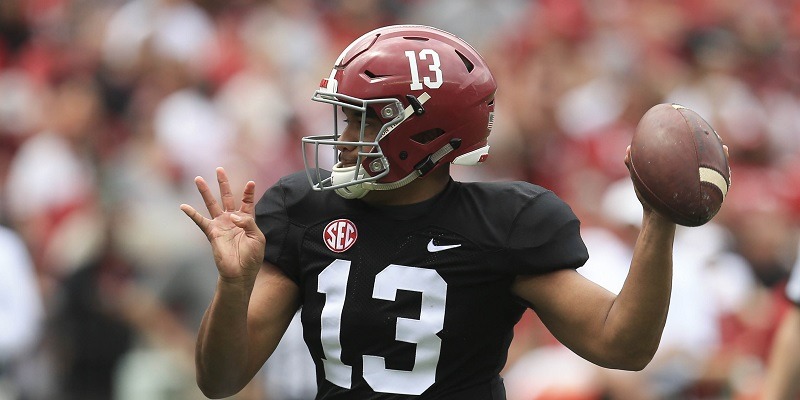 With most of the free agent dust settled, the 2020 NFL Draft landscape looks a bit clearer, but some fogginess remains — as usual — around the quarterbacks.

Even with Cam Newton and Jameis Winston still available, most starting jobs have been filled, and there aren’t many teams who are surefire bets to draft a quarterback early.

How the Miami Dolphins (No. 5) and Los Angeles Chargers (No. 6) handle the position will have ripple effects throughout the first round. Will both teams draft a quarterback? Do they have eyes for the same one? Will both be comfortable with Alabama’s Tua Tagovailoa’s health status without a medical recheck due to the COVID-19 outbreak?

Those are the biggest questions with the draft (for now) just four weeks away.

1. Cincinnati Bengals: Joe Burrow, QB, LSU
The Dolphins might offer the moon for this pick, but it would take a ton for the Bengals pass on Burrow, one of the most complete quarterback prospects in the last several years.

2. Washington Redskins: Chase Young, DE, Ohio State
Like Cincinnati, Washington will be hard-pressed to trade down. Discussions could ramp up if both the Dolphins and Chargers are looking to trade up for Tua Tagovailoa, but No. 3 overall seems like the more likely spot for that.

*3. Miami Dolphins (from Detroit): Tua Tagovailoa, QB, Alabama
It might be tough to evaluate Tagovailoa’s recovery from hip surgery, but everything appears to be going as planned. Ultimately, his talent wins out, and the Dolphins move up to ensure they get him over the quarterback-needy Chargers.

4. New York Giants: Tristan Wirfs, OT, Iowa
Clemson linebacker Isaiah Simmons is an obvious option, and Ohio State cornerback Jeffrey Okudah could be, too, even after the signing of James Bradberry. But Dave Gettleman can’t pass up a “hog mollie” with Wirfs’ gifts. He slides in immediately at right tackle and could replace Nate Solder on the left side at some point.

*5. Detroit Lions (from Miami): Jeffrey Okudah, CB, Ohio State
The Lions would have taken Okudah at No. 3. Instead, they extract a first-rounder (No. 18 overall) while still getting the best cornerback prospect since Jalen Ramsey. Worth noting: The traditional trade-value chart suggests Miami’s second-round pick (No. 39) would be fair compensation, but teams trading up for quarterbacks — lacking leverage — almost always pay a hefty premium.

6. Los Angeles Chargers: Justin Herbert, QB, Oregon
Herbert has long been connected to the Chargers, but they might prefer Tagovailoa. In this case, the choice is simpler. That said, we wouldn’t rule out a left tackle, which could mean drafting a second-round QB (Jalen Hurts?) or signing Cam Newton. If Herbert doesn’t go by No. 6, he could slide.

7. Carolina Panthers: Isaiah Simmons, LB/S, Clemson
Teddy Bridgewater’s signing doesn’t preclude the Panthers from drafting a quarterback, but a project like Jordan Love seems unlikely. They could use D-line help (Derrick Brown), but Simmons is a unique defensive weapon to build around following Luke Keuchly’s retirement.

8. Arizona Cardinals: Jedrick Wills, OT, Alabama
The Cardinals brought back right tackle Marcus Gilbert, but he’s been wildly injury-prone. As tempting as it is to reunite Ceedee Lamb with former Oklahoma teammate Kyler Murray, Wills makes the most sense as a plug-and-play right tackle.

9. Jacksonville Jaguars: Derrick Brown, DT, Auburn
With Jalen Ramsey and A.J. Bouye both gone, Jacksonville badly needs cornerback help, making Florida’s CJ Henderson a prime option. But the Jags also moved on from Calais Campbell and Marcell Dareus, and Brown is a great value at No. 9.

10. Cleveland Browns: Mekhi Becton, OT, Louisville
An offensive tackle is a no-brainer for the Browns. They’ve been connected to Tristan Wirfs, but the massive Becton (6-7, 364 pounds) would fit fine on Baker Mayfield’s blind side.

11. New York Jets: Andrew Thomas, OT, Georgia
Like the Browns, the Jets should be locked on the top four offensive tackles. In this case, only Thomas is still available. He should start from Day 1 at left tackle, with George Fant battling Chuma Edoga on the right side.

12. Las Vegas Raiders: CJ Henderson, CB, Florida
Having added two linebackers in free agency, the Raiders would love to come out of Round 1 with a wideout and a cornerback. There’s a slight drop-off at corner after Henderson, so Las Vegas decides to wait until No. 19 for a receiver.

14. Tampa Bay Buccaneers: Javon Kinlaw, DT, South Carolina
Bruce Arians might want a young, toolsy QB — like Jordan Love — to develop, but the priority will be to help Tom Brady. (Maybe Arians can nab Washington’s Jacob Eason in Round 2). Kinlaw’s value is tough to pass up, especially with Ndamukong Suh on a one-year deal at age 33.

15. Denver Broncos: Jerry Jeudy, WR, Alabama
The Broncos would love to see Ruggs available, but they should still be overjoyed to land Jeudy. His route-running polish is exceedingly rare for a college prospect, and he still has the speed to get loose deep.

16. Atlanta Falcons: Trevon Diggs, CB, Alabama
Adding Dante Fowler Jr. soothed Atlanta’s need for an edge rusher, but a glaring hole remains at cornerback. This might be a tad early for Diggs, but he fits perfectly in Dan Quinn’s scheme.

17. Dallas Cowboys: K’Lavon Chaisson, DE, LSU
Many have connected safeties Xavier McKinney or Grant Delpit to the Cowboys, but they also need help up front after losing Robert Quinn and Maliek Collins. Chaisson — while a bit boom-or-bust — is better value than a defensive tackle here.

*18. Detroit Lions (from Miami): D’Andre Swift, RB, Georgia
Taking a running back feels rich given all of Detroit’s needs, but the Lions have sniffed around several backs of late, and Kerryon Johnson hasn’t stayed healthy. Swift or Wisconsin’s Jonathan Taylor could be in play.

19. Oakland Raiders (from Chicago): Ceedee Lamb, WR, Oklahoma
The Raiders’ gamble — passing on a wideout at No. 12 — pays off with Lamb still available. He provides Jon Gruden a big-bodied wideout with fantastic elusiveness in the open field.

20. Jacksonville Jaguars (from L.A. Rams): Kristian Fulton, CB, LSU
Fulton has some character questions, but he’s got plenty of talent. Would the Jaguars consider Jordan Love? If so, they’re keeping it awfully quiet.

21. Philadelphia Eagles: Justin Jefferson, WR, LSU
The Eagles have addressed most of their holes, but they clearly need another wideout or two. Jefferson, a master of crafty releases and routes, could be for Carson Wentz was Keenan Allen has been for Philip Rivers.

22. Minnesota Vikings (from Buffalo): A.J. Terrell, CB, Clemson
The Vikings suddenly have several holes, and I’m not sure it makes sense to spend a first-rounder on Stefon Diggs’ replacement. Terrell, despite struggles against LSU, is ready to start and fills an immediate need.

23. New England Patriots: A.J. Epenesa, DE, Iowa
Some have connected New England to Jordan Love — if he slides — but Love wouldn’t mix with Bill Belichick’s emphasis on protecting the ball. Epenesa, though, fits Belichick’s scheme perfectly, as a power-based end with inside-outside versatility.

24. New Orleans Saints: Jordan Love, QB, Utah State
The Saints just missed out on Patrick Mahomes in 2017. They like Taysom Hill and might very well invest this pick to maximize Drew Brees’ championship window… but Sean Payton could be tempted (perhaps even via trade-up).

26. Miami Dolphins (from Houston): Austin Jackson, OT, USC
If the Dolphins can get their QB and an adequate left tackle, Round 1 will be a wild success. Jackson’s tape has blemishes, but some 2019 struggles could be attributed to lingering effects from a blood-marrow donation he gave his sister last summer.

27. Seattle Seahawks: Josh Jones, OT, Houston
The Seahawks added Brandon Shell and Cedric Ogbuehi in free agency, so Jones wouldn’t have to play right away. He could eventually become the successor to left tackle Duane Brown, who turns 35 in August and has two years left on his contract.

28. Baltimore Ravens: Kenneth Murray, LB, Oklahoma
Murray could certainly go earlier, but there wasn’t an obvious fit. The Ravens have drafted several Sooners with good results, and Murray has the work ethic and character they covet.

29. Tennessee Titans: Xavier McKinney, S, Alabama
Cornerback Logan Ryan remains a free agent, and safety Kenny Vaccaro’s could be a cap casualty next spring. McKinney played everywhere for Nick Saban, making him a perfect fit for the Titans’ disguised zone coverages. He could start as Ryan’s replacement in the slot.

31. San Francisco 49ers: Ross Blacklock, DT, TCU
A trade-down seems exceedingly likely — the 49ers have no picks in Rounds 2-5 — but there’s no obvious trade-up partner at this point. Blacklock would add a twitchy disruptor inside to help replace DeForest Buckner.

32. Kansas City Chiefs: Patrick Queen, LB, LSU
The Chiefs also need a cornerback, but they’ve been picked on by pass-catching running backs of late. A speedy, physical linebacker, Queen would be a terrific value here.